Completion of the 1st Symposium of Orthodox female chanters 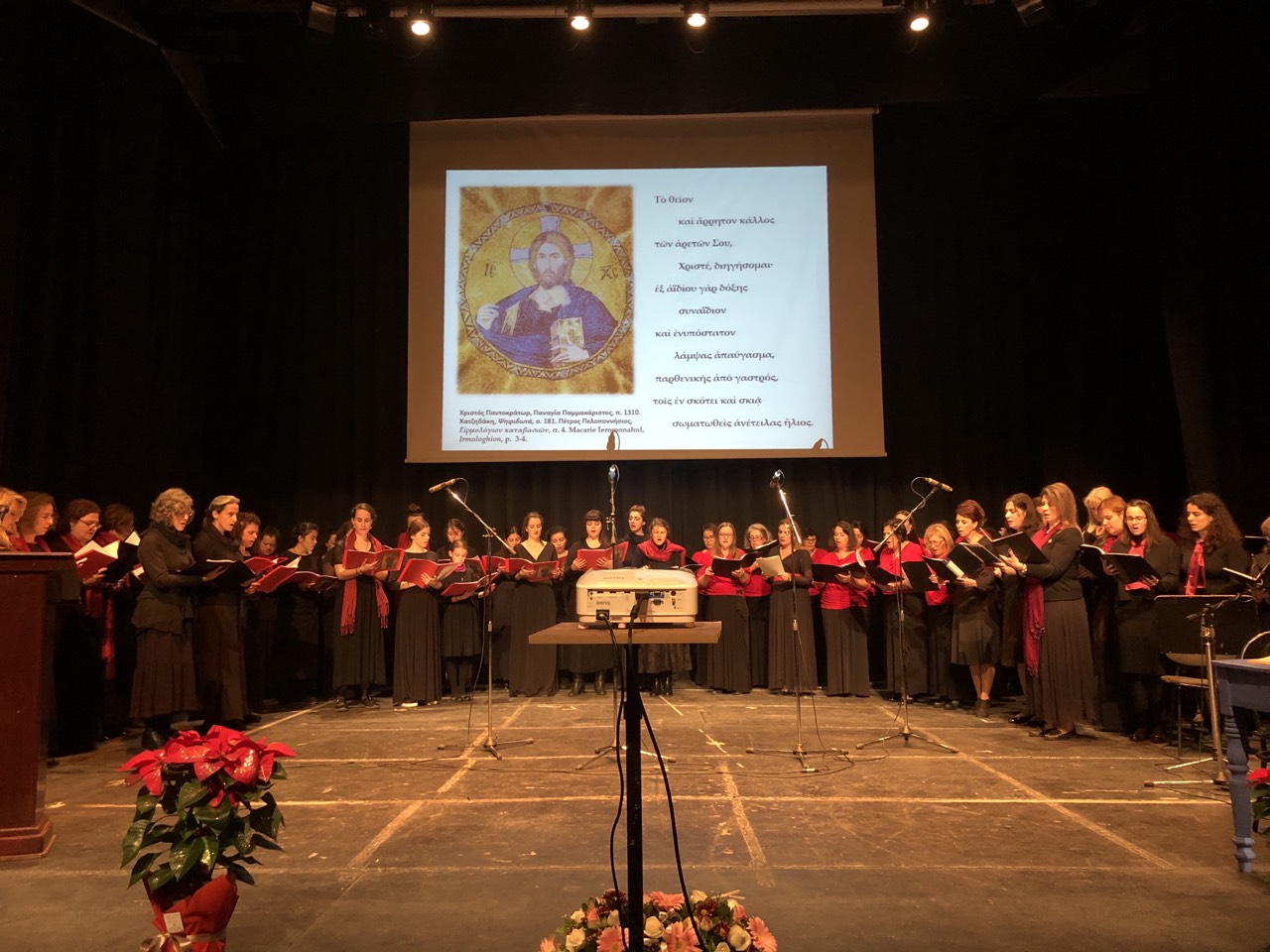 On November 22-24, 2019, the 1st Symposium of Orthodox female chanters and the 1st Festival of female chanter choirs “Saint Cecilia” was successfully held in Volos, Greece. The Symposium was organized by the Volos Academy for Theological Studies, in cooperation with the Chanter Choir (“Ai Adousai”), while the whole event was under the auspices of the Metropolis and the Metropolitan of Demetrias and Almyros Mgr. Ignatius. The artistic direction of the event was undertaken by Dr. Sevi Mazera-Mamalis, domesticaine of the Chanter Choir “Ai Adousai.”

A number of 80 female chanters participated in the Symposium, coming from various parts of Greece (Athens, Megara, Corinth, Aegio, Pyrgos Helias, Agrinio, Mesologgi, Corfu, Thessaloniki, Chalkida, Drama, Komotini, Trikala, Larissa, etc.), along with chanters sent from the Holy Metropolis of Argirokastro (Orthodox Church of Albania). Byzantine music teachers, chanters, students of Byzantine music schools, students of University Departments of Chanting Art and Departments of Musicology also participated. Lectures and short papers were presented by professors of Musical Departments from various Greek Universities, PhDs scholars, PhD candidates, holders of postgraduate degrees in musicology, etc. Dr. Gregorios Stathis, Professor, Emeritus of Byzantine Musicology of the University of Athens, Director of the Institute of Byzantine Musicology of the Holy Synod of the Church of Greece, as well as Dr. Theodoros Yagou, Professor of Canon Law and Dean of the Faculty of Theology at the University of Thessaloniki were also attended and gave a talk during the Symposium.

The official opening of the Symposium took place on the afternoon of Friday, November 22, at the Thessalia Conference Center in Melissiatika, Volos, on the day of the feast of Saint Cecilia, the patron saint of music. Dr. Pantelis Kalaitzidis, the Director of the Volos Academy for Theological Studies welcomed the event by announcing the start of the three-day Symposium. The event was also greeted by Archimandrite Epiphanios Economou, the representative of the Metropolitan of Demetrias, and Director of the School of Byzantine Music of the local diocese, and the artistic director of the festival and Domesticaine of the “Ai Adousai” Chanter Choir Dr. Sevi Mazera-Mamalis.

The key-note lecture of the Symposium (1st Session, Moderator Dr. P. Kalaitzidis) was delivered by Professor Gregorios Stathis. The talk, based on Professor Stathis’ 50-year research on thousands of musical manuscripts and entitled “Yesterday I saw a Dream,” was a flashback to time, a memorial to the few well-known Byzantine female chanters in the Byzantine era, when female chanting in monasteries as well as in parishes was a vivid reality. Prof. Stathis also referred to the modern times and the great monastic choirs of nuns that were developed in the last decades under his guidance and teaching (The Holy Monastery of Evangelismos of Ormylia; the Holy Monastery of Archangels of Agios Georgios Nilias, Pelion; the Holy Monastery of Daou Penteli near Athens), or established at his instigation (“Ai Adousai” Chanter Choir in Volos). The opening of the Symposium ended with a performance by “Ai Adousai” Chanter Choir, where a program featuring works by Ioannis Master Koukouzelis, Melchizedek Bishop of Redestos, Balassios Priest and Guardian of the Great Church of Christ in Constantinople, Petros Berrietti, and Gregorios Protopsaltis were presented. In addition the official program and in honor of Professor Gregorios Stathis, the Chanter Choir chanted an “Allilouiarion” hymn, set to music by himself. The event ended with the troparion of Saint Cecilia.

On Saturday morning, November 23 the symposium continued with academic presentations and short papers.

Despina Loukidou , Musicologist (“The Image of Our Lady of Passion and the Capture of the Virgin’s mourning through a special hymn of Leon VI the Wise”).

Nektaria Karadzi , PhD in Law, President of the Athens Metropolitan Symphony Orchestra under the auspices of His Beatitude Archbishop of Athens Ieronymos (“A Short Nomocanonical Approach to the Role of Woman in the Chanting Art”).

Theodoros Yagou , Professor of Canon Law and Dean of the Faculty of Theology, Aristotle University of Thessaloniki (“The Role of Women in Public Worship”).

The first workshop was led by Professor Maria Alexandrou and entitled “Kassiani, the Byzantine poet and composer,” in which almost all the eighty female chanters actively participated. During the workshop, the life and work of saint Kassiani were presented, while the chanters chanted some of her best-known hymns. The workshop was attended by a group of musical instruments, while Mr. Vassilis Agrokostas, musicologist, guitar and Byzantine music graduate, first chanter and performer, participated as a guest in the group of musicians playing lyra from Constantinople, featuring the role of the emperor Theophilos.

In the second and last workshop led by Dr. Sevi Mazera-Mamalis the participating female chanters joined in a choir, chanting Axion Esti in the second plagal mode by Gregory the Protopsaltis as well as the Dismissal hymn (Apolytikion) of Saint Cecilia.

The afternoon concert for the 1st Festival of Chanters Choirs was held at the Theater of the Old Electrical Company of Volos, in the presence of His Eminence the Metropolitan of Demetrias Ignatius. They took part in performing Byzantine hymns:

The Female Chanters Choirs “Women's Voice” of the Holy Metropolis of Chalkida conducted by Maria Kapsali.

The concert was followed by a performance entitled “Kassiani, the Byzantine Poet and Composer”, in which the almost 80 female chanters of the symposium, along with a group of musicians and Mr. Vassilis Agrokostas actively participated.

The musical part of the Festival ended with the three choirs and all the female chanters on stage performing the troparion of Saint Cecilia and the Axion Esti in second plagal mode by Gregory Protopsaltis, conducted by the domesticaina Sevi Mazera-Mamalis.

The event was concluded with a short speech by Metropolitan Ignatius of Demetrias who congratulated the organizers on the success of the project, the large number of participants and the high level of contributions. In closing he awarded the choirs directors of all the three Choirs honorary praises.

The three-day event ended with the participation of the female chanter choirs “Ai Adousai” (Volos) and “Female Voices” (Chalkida) at the Divine Liturgy on Sunday, November 24, 2019 at the Evangellistria Church of Nea Ionia, in live broadcast by the local “Astra TV” station and the “Orthodox Witness” Radio Station of the Metropolis of Demetrias.

A Greek-Iranian Interfaith Webinar was held on September 7th, 2020 in the frame of interfaith dialog...
Infrastructure on Religious St...

Thirteen academic institutions from eleven countries are working on the establishment of a permanen...
Treasures from Eastern Europe:...

Dear friends of the Volos Academy for Theological Studies,We would like to inform you that due to th...
© 2017 - 2020 acadimia.org