Α Memorandum of Agreement between the Volos Academy for Theological Studies and the “Saint Platon” Theological School of Tallinn, Estonia 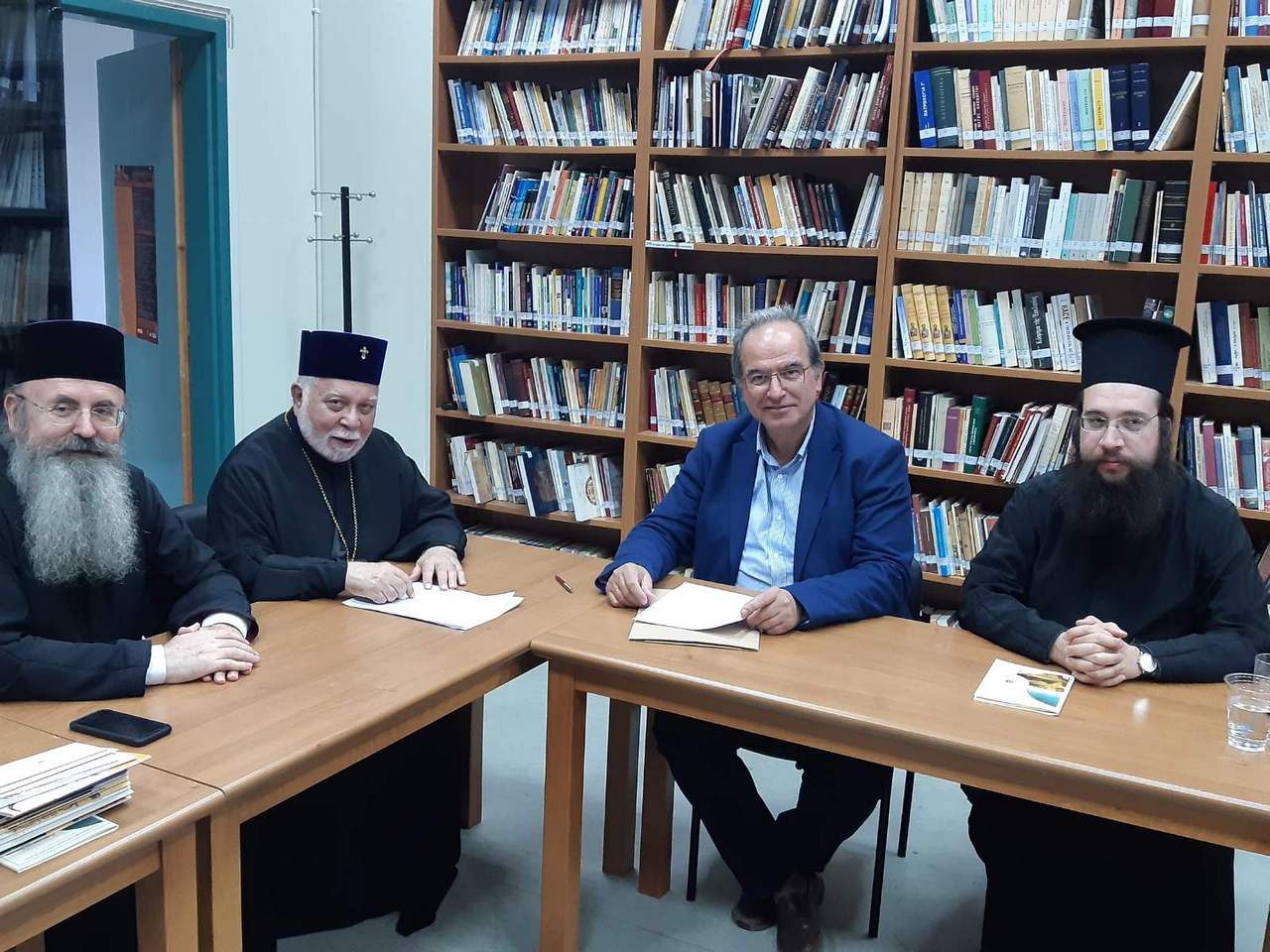 On Friday, October 18, 2019, a Memorandum of Agreement was signed in Volos between the Volos Academy for Theological Studies and the “Saint Platon” Theological School of Tallinn, of the Estonian Apostolic Orthodox Church. The Memorandum provides, inter alia, academic and educational co-operation in a variety of areas, such as the exchange of professors and researchers, the co-organization of conferences, seminars and research projects, the joint publication of monographs, collective volumes, and journals, the mutual enrichment of the respected libraries, etc.

His Eminence Metropolitan of Estonia Mgr. Stefanos was guided by Dr. Kalaitzidis to the facilities of the Thessalia Conference Center, in Melissatika, Volos, where the offices and the libraries of the Volos Academy for Theological Studies are also located. After the signing of the Memorandum, commemorative gifts were exchanged between the heads of the two institutions.

In his brief intervention, Metropolitan of Estonia, Mr. Stefanos, underlined the historical importance of the signing of the Memorandum of Agreement for the Estonian Orthodox Church and the academic upgrading of Orthodox theology in that Baltic country. On his side Dr. Kalaitzidis did not fail to thank His Eminence Metropolitan Stephanos of Estonia for the honor and the trust in the work of the Volos Academy for Theological Studies.

On Sunday, October 20, His Eminence the Archbishop of Tallinn and Metropolitan of all Estonia Mgr. Stefanos presided over the Divine Liturgy at St. Nicholas church, the Cathedral of Volos, while His Eminence Metropolitan Ignatios of Demetrias and the Bishop of Olvia Epiphanios, Hierarch of the newly established Autocephalous Orthodox Church of Ukraine, co-celebrated.

At the end of the Divine Liturgy, Metropolitan of Demetrias Ignatios fraternally addressed the guests hierarchs, referring to his lasting relationship with the Head of the Autonomous Orthodox Church of Estonia under the Ecumenical Patriarchate, Mgr. Stefanos, praising his efforts and struggles to fortify the Orthodox Church in Estonia. At the same time, he expressed his pleasure for the first co-celebration with an Hierarch of the Autocephalous Church of Ukraine, following the recent positive attitude in this respect of the Holy Synod of the Greek Orthodox Church in the issue of the former’s autocephaly.

On his part, Metropolitan Stefanos expressed his great satisfaction for the opportunity of this co-celebration of the Divine Liturgy, thanking His Eminence the Metropolitan of Demetrias for his brotherly hospitality and their common witness to diverse Orthodox fora over the years, while he also spoke warmly of the Memorandum of Agreement signed between the Volos Academy for Theological Studies and the Theological School of the Estonian Church, which has been recently recognized by the Estonian state and has been praised for its high academic quality.

At the noon of Sunday, October 20, the Prelate of the Estonian Orthodox Church had the opportunity to visit the Byzantine Museum of Makrinitsa. His Eminence was guided to the facilities of the Byzantine Museum by its Director, Rev. Damaskinos Kiametis, the Protosyngelos of the Holy Metropolis of Demetrias. Metropolitan Stefanos expressed his gratitude for his experience to visit the Ecclesiastical Museum of Makrinitsa and his admiration for the richness of the ecclesiastical relics belonging to the Museum's collections.

The visit of His Eminence Metropolitan of Estonia Mr. Stefanos was concluded with a meal offered by the Parish of the Dormition of the Virgin Mary in Makrinitsa, attended by the Metropolitans Stefanos, and Ignatios and their entourage.