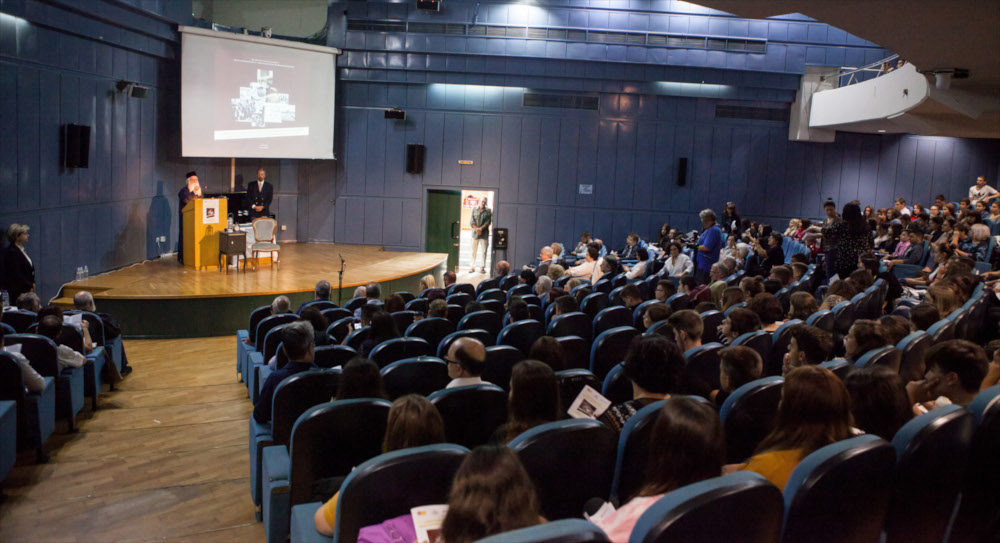 On 4th October 2019 a dissemination event was successfully held at theUniversity of Thessaly on the results of the pilot programme that brought into focus the narrative of the Holocaust through art and history. About 450 students and 60 teachers from the schools of Magnesia attended the event that concerned the programme implemented in the region during the school year 2018-19.

Volos Academy for Theological Studies/Research Center organised the pilot programme in cooperation with the Jewish Community of Volos and the Directorate of Secondary Education of Magnesia. The programme, which was approved by the General Secretariat on Religious Affairs of the Greek Ministry of Education and Religious Affairs, sought to connect the contemporary reality of students with the history and culture of the Jewish population of Greece and the rest of Europe. It presented historical instances and events that relate to anti-Semitism and ultimately to the Holocaust.

Students had the opportunity to tackle the main points of the matter usingcontemporary experiential teaching methods. Study of historical events, and recorded experiences of people who went through hardships and their descendants served this purpose. The visit of forty students to the Synagogue of Volos, the Jewish Museum of Greece, and the Synagogue of Athens, and especially the pilgrimage of ten of them to the Auschwitz-Birkenau concentration camps, were significant sources of experiential learning.

Participation in the programme enabled students to have an interaction and exchange on human attitudes and behaviours concerning racism, intolerance and xenophobia. The programme gave them the tools to explore the value of plurality and the importance of diversity, and understand that racial and religious hatred leads to extreme and destructive choices.

“The diversity in expressions and the emotional richness of their work has been reflected in the Holocaust album which demonstrates that teaching and learning can be successful when driven by vision and inspiration,” said Mrs. Tania Avella, responsible for the coordination and implementation of the pilot programme on behalf of Volos Academy.

Soprano Mariangela Hatzistamatiou, and musicians Pepo Salem and Konstantinos Coletsio enriched the event with their artistic contribution, while volunteers from the Jewish Community of Volos offered their services during the event that was coordinated by Ms Efi Abouaf and Ms Evi Kouvli with representatives of the Board of Directors of the Jewish Community.

The event concluded with a powerful message that came from the students of the pilot programme. After a moment of silence was kept for the victims of the Holocaust, the students held up a banner with the name of a child of the local Jewish community who was unjustly perished in the Holocaust and shouted ‘For humankind not to perish, NEVER AGAIN!’

The pilot program was made possible thanks to the generous donations coming from institutions, businesses, and individuals, while the publication of the Album with the works of the students was funded by Agape-Hellas.

To read the greeting (in Greek) of the Director of the Volos Academy for Theological Studies Dr. Pantelis Kalaitzidis click here