“FOR THE LIFE OF THE WORLD”: THE SOCIAL TEACHING OF THE ORTHODOX CHURCH 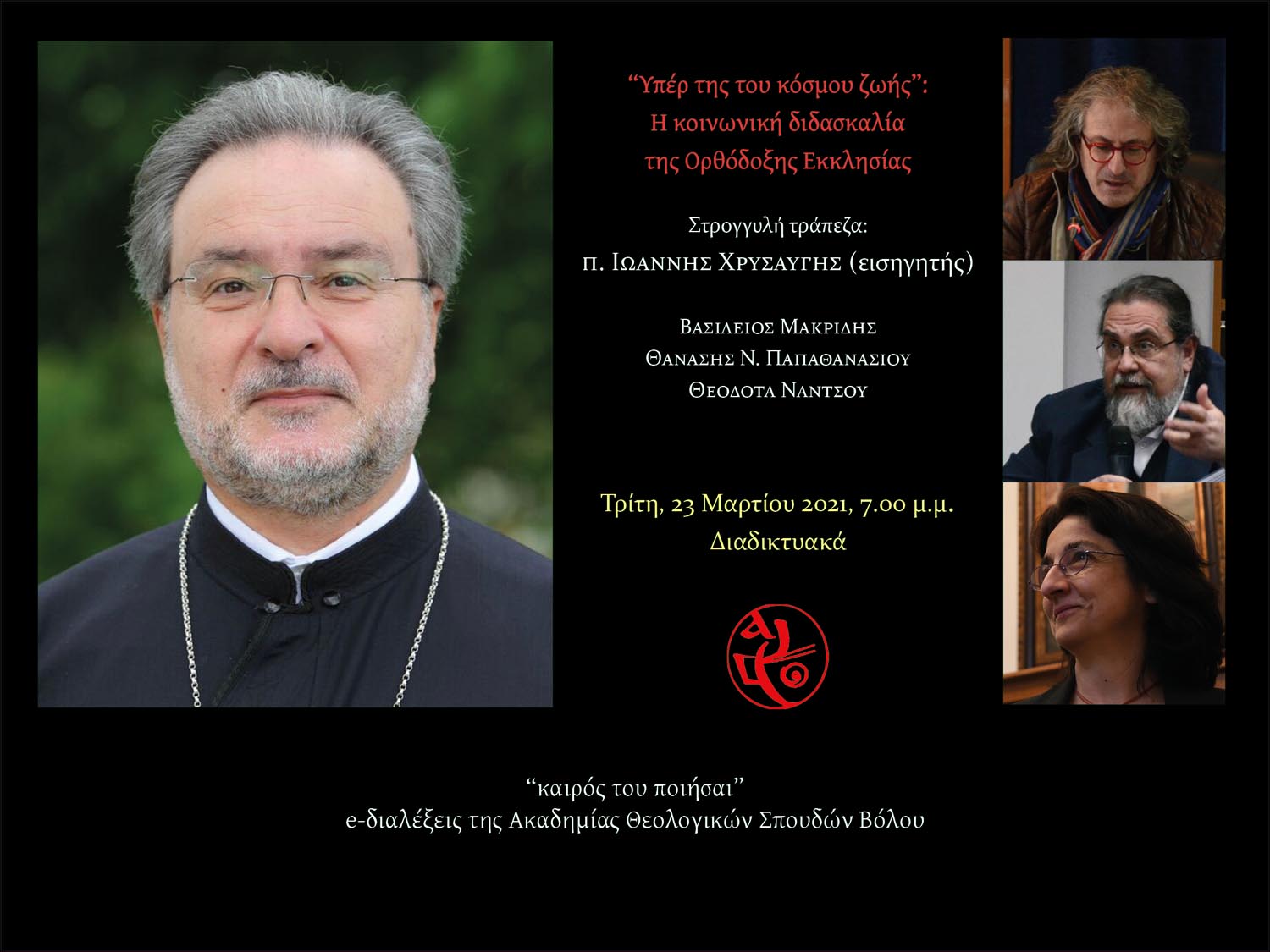 The forth online event in the series “Time for Action” organized by Volos Academy for Theological Studies will take place on Tuesday, March 23, 7 p.m. Greek time. Admission is free. The main speaker will be Rev. Dr. John Chryssavgis (see detailed bio below), while the participants of the panel will be Dr. Vasilios Makrides (Prof. of Sociology of Orthodox Christianity, Erfurt University, Germany), Dr. Athanasios N. Papathanasiou (Editor-in-chief of the journal “Synaxi”, Associate Professor of the Supreme Ecclesiastical Academy of Athens) and Mrs. Theodota Nantsou (Head of Policy of WWF-Greece). The topic of the discussion will be “For the life of the world”: The Social Teaching of the Orthodox Church.

Being Orthodox, we speak more comfortably of the heavenly kingdom than of earthly problems. The tensions experienced by the Church, being “in the world” but not “of the world”, lead it to a situation that either tends to recede into an idealized past or to resort to a mythological future, without attempting a dialogue with the tangible present. Last year, the Ecumenical Patriarchate unanimously adopted a new text on social issues, prepared by a theological committee officially appointed by the Ecumenical Patriarch, presenting the general positions and guiding principles on the role of the Orthodox Church and the responsibility of the Orthodox believers in the modern world. The text, entitled “For the Life of the World”: Towards a Social Ethos of the Orthodox Church, was published in March 2020 in fourteen languages, touching on critical and controversial issues such as racism and poverty, human rights and bioethics, technology and climate change. This text will be the starting point for the presentation and discussion.

Rev. Dr. John Chryssavgis, Archdeacon of the Ecumenical Throne, was born in Australia. He studied theology in the University of Athens and completed his doctoral research in Oxford. He worked with the Greek Orthodox Primate in Australia and was co-founder of St Andrew's Theological College in Sydney, where he was Sub-Dean and taught Patristics and Church History. He was also Lecturer in the Divinity School and the School of Studies in Religion at the University of Sydney. In 1995, he moved to Boston, where he was appointed Professor of Theology at Holy Cross School of Theology and directed the Religious Studies Program at Hellenic College until 2002. He currently serves as theological advisor to the Ecumenical Patriarch on environmental issues. He has published several books and countless articles in international journals and encyclopaedias in the area of patristic and ascetic spirituality, religion and ecology, social justice and peace. Among them Soul Mending: The Art of Spiritual Direction (Holy Cross Press, 2000), In the Heart of the Desert: The Spirituality of the Desert Fathers and Mothers (World Wisdom Books, 2003), Light Through Darkness: Insights into Orthodox Spirituality (Orbis Books, 2004), Bartholomew: Apostle and Visionary (Harper Collins, 2016), etc.