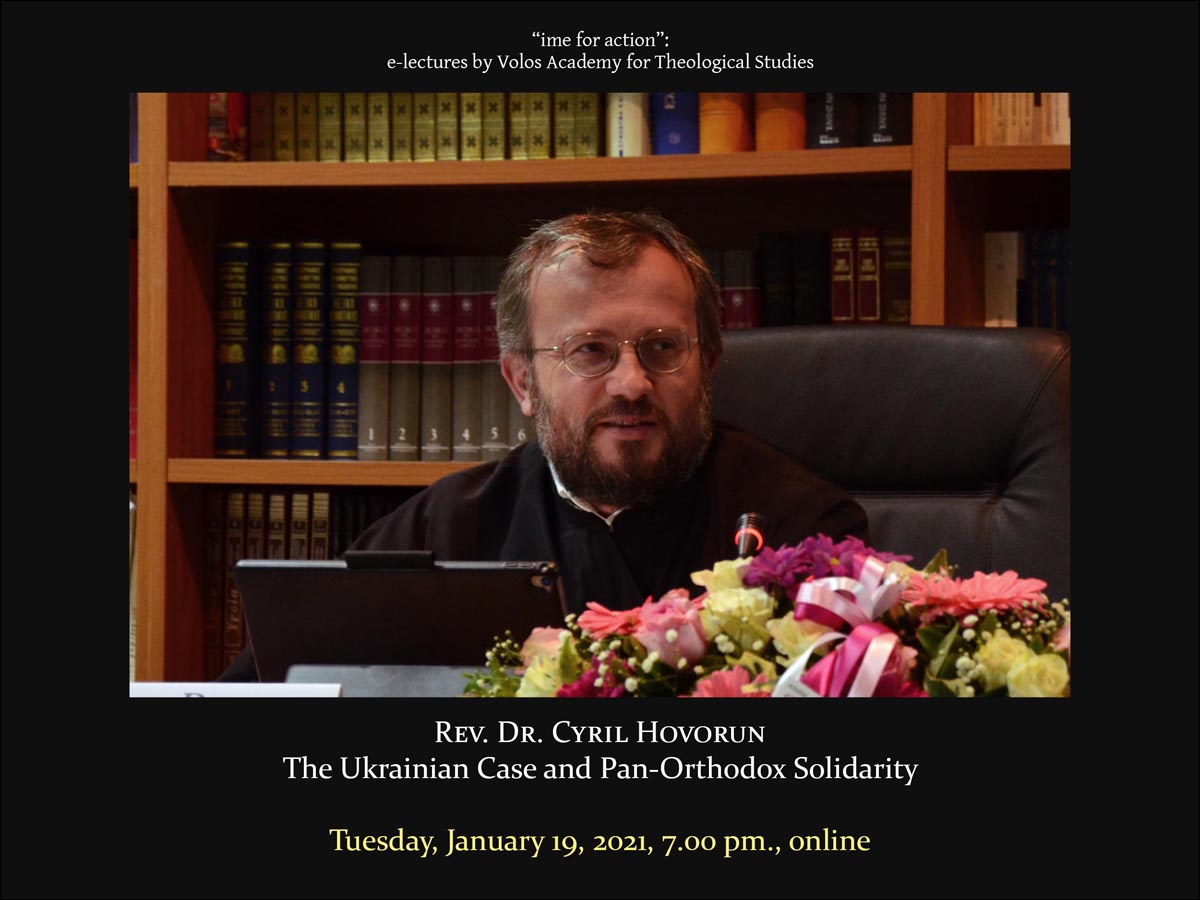 Tomorrow, Tuesday January 19, 2021, time 7.00 PM (Athens time), there will be the first of the online lectures “Time for Action”, hosted by Volos Academy for Theological Studies. The lecture, under the title “The Ukrainian issue and panorthodox solidarity” will be delivered by Rev. Dr. Cyril Hovorun. It will be held via Zoom and the link for attending is https://zoom.us/j/96783527291. The lecture will last one hour and thirty minutes and the language will be Greek.

To understand the so-called Ukrainian issue, we must begin a thousand years ago, when the Church of Constantinople established its Diocese in Kiev. After the Mongol invasions in 1240, the Kiev Diocese acquired two centers. The Moscow-based part of the Diocese declared itself autocephalous in 1448. The other part of the Kiev Diocese, located in Lithuania and covering the territory of present-day Ukraine, remained faithful to the Ecumenical Patriarchate. In 1686, Constantinople granted Moscow the right to enthrone the Metropolitans of Kiev. After the collapse of the Russian Empire in 1917, parts of the historic Metropolis of Kiev were found in independent states, such as Poland and Ukraine. By the 19th century, autocephaly had become part of the anti-colonial movement. In this spirit, the government of the independent (Soviet) Republic of Ukraine supported the creation of the autocephalous church and began negotiations with the Ecumenical Patriarchate. But the Patriarchate was reluctant to intervene. Things changed in 1991, when Ukraine again became an independent state. It immediately began to seek the autocephaly of its church. The Ecumenical Patriarchate initially hesitated to intervene in the resolution of the Ukrainian problem. The issue was resolved only in 2018. I believe that two events contributed to this: Russia's war against Ukraine after the 2014 Revolution, and the absence of the Russian Church at the Pan-Orthodox Synod of Crete in 2016.

Archimandrite Cyril Hovorun is a Professor in Ecclesiology, International Relations and Ecumenism at Sankt Ignatios College, Stockholm School of Theology. A graduate of the Theological Academy in Kyiv and National University in Athens, he accomplished his doctoral studies at Durham University under the supervision of Fr Andrew Louth. He was a chairman of the Department for External Church Relations of the Ukrainian Orthodox Church, first deputy chairman of the Educational Committee of the Russian Orthodox Church, and later research fellow at Yale and Columbia Universities, visiting professor at the University of Münster in Germany, international fellow at Chester Ronning Centre for the Study of Religion and Public Life at the University of Alberta in Canada, director of the Huffington Ecumenical Institute at Loyola Marymount University in Los Angeles and Assistant Professor at the same university.