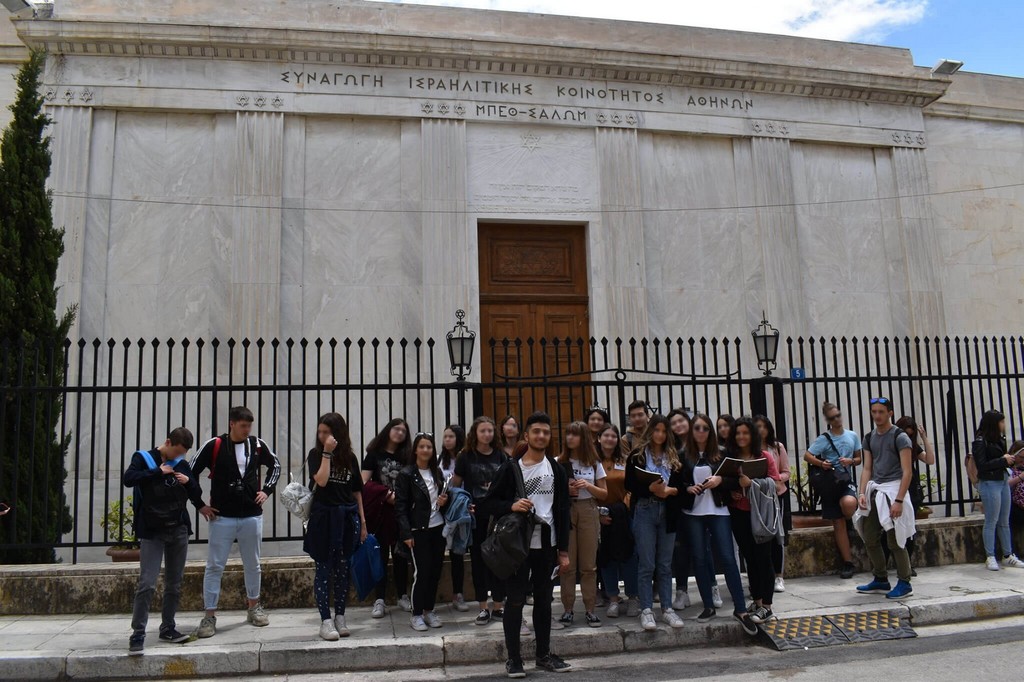 • Educational visit to the Jewish Museum of Greece and the Synagogue of Athens (May 8, 2019)

The Volos Academy of Theological Studies - Research Center , organizes and implements exclusively for the current school year 2018-19 an Educational Pilot Program for the History and Teaching of the Holocaust, approved by the General Secretariat for Religious Affairs of the Hellenic Ministry of Education, Research and Religious Affairs, in collaboration with theDirectorate of Secondary Education of Magnesia, theJewish Community of Volos and the Jewish Museum of Greece.

In the context of this joint action, which aims at connecting the Holocaust with the contemporary reality of the students, their feelings and the code of their moral values, an educational visit to the Volos Synagogue was organized under the supervision of the Director of the Volos Academy of Theological Studies Dr. Pantelis Kalaitzidis, on April 16. During that visit, students of the 1st and 2nd Grade of High School along with the teachers of the above action, Angeliki Gourou, (8th High School of Volos), Giannoula Zarkada (High School of Kanalia), Alexia Kapravelou (High School of Scopelos), Vassiliki Melissourgou (3rd High School of Volos), Alexandra Mourtzi (High School of Agria) and Dimitrios Papanikolaou (High School of Kanalia), as well as the person responsible for the implementation of the Program on behalf of the Volos Academy Mrs. Tania Avella, MA, were guided by Mr. Makis Moses, a temporarily religious officer.

The visit was followed by a fruitful dialogue that emerged from a series of questions that the students asked with regards to what they saw, listened to and previously studied about the culture and local history of the particular community. Afterwards, the President of the Jewish Community of Volos, Mr. Marcel Solomon, welcomed the students to the Community’s event hall, while according to the program of the visit, Mrs. Roula Coné shared with a lively narrative speech the “Rescue Testimony” of her family, stimulating the feelings of all.

During the follow-up joint-teaching on “ Composing and Living Stories of Memory - Child and Holocaust ” and with the participation of all students, their mutual understanding and engagement was achieved regardless of their school of origin through the team-building techniques. Moreover, taking as their central concept of processing the term “stereotypes,” it was attempted to investigate both the causes and the consequences provoked by the stereotypical perceptions and prejudices which finally trap the mind.

On May 8th, the team visited the Jewish Museum of Greece in Athens. The students had the opportunity to get acquainted with the historical presence of the Jewish Community in Greece by the Archaeologist-Special Researcher of the Museum, Mrs. Anastasia Loudarou, while they were guided to the Museum’s premises and through the permanent collection exhibits they came into contact with the history and culture and the other Jewish Communities of Greece thanks to the presentation of Mrs. Orietta Treveza, responsible for educational programs.

In addition, through the rich photographic material and other exhibits, they had a first opportunity to get acquainted with the reality of the Holocaust by the historian and special researcher of the Museum, Mrs. Alexandra Patrikiou, who then organised a preparatory seminar for the group of the students and their supervisors who would visit the Auschwitz-Birkenau State Museum in Poland. At the end, all students and teachers were offered relevant educational material.

The group, after a short tour at the city center of Athens, arrived at the Sephardic Jewish Synagogue “Beth Salom” built in 1935, close to the Romaniotic Synagogue “Ets Haim” which was built in 1904. Rabbi Gabriel Negrin welcomed the group and after making a brief historical review of the Athens Jewish Community, gave the students time for questions and discussion. Moreover, the volunteers Mrs. Emma Mekiou and Mr. Solomon Herrera of the Jewish Community of Athens shared information on the religious services and sacred relics, the celebrations, and the customs of the Jewish tradition.

Their narrations of the Jewish people’s historical path and dispersion, the tribulations and the relentless persecution suffered by the German Nazi regime, as well as the power of the soul and the ethos that it displayed, triggered the reflection and the revision of thought and of behavior. As it has been emphasized, all this is the foundation of our culture and a shield of protection against racism, intolerance and inhumanity.

On Wednesday 23 May, a meeting of the Pilot Program participants was held at the Volos Academy of Theological Studies in Melissatika, Volos, in order to evaluate the course of the Program and to identify the next steps related to the completion of the students’ work and the ways of diffusion their experience of participating in the Program and the educational and pilgrimage visit to Auschwitz.

In addition, during the same meeting the basic tenets of the presentation of the overall action in an official event were discussed, which will take place in a central hall in Volos on June 30, 2019, open to the public, in the presence of the Metropolitan of Demetrias and Almyros Ignatios, the General Secretary of Religions Affairs of the Ministry of Education, Research and Religious Affairs, Mr. George Kalantzis, the President of the Israeli Community of Volos Mr. Marcel Solomon, the Director of the Volos Academy of Theological Studies Mr. Pantelis Kalaitzidis, the teachers and the students of the program, et al.

Finally, on 2 May, the “March of the Living,” the Memorial ceremony for the victims of the Holocaust was held in Auschwitz-Birkenau, Poland, with officially honored guest person, His-All Holiness, the Ecumenical Patriarch Bartholomew. The above ceremony, as a follow-up to the actions of the Program, was attended by Mrs. Tania Avella, as the person responsible for the implementation of the project on the part of the Volos Academy for Theological Studies.

To see the program of the Educational Visit to the Volos Synagogue (greek), click here

To see the Press Release of the Jewish Museum of Greece https://www.jewishmuseum.gr/episkepsi-mathiton-apo-to-volo/

PrevNext
Presentation of the activities...