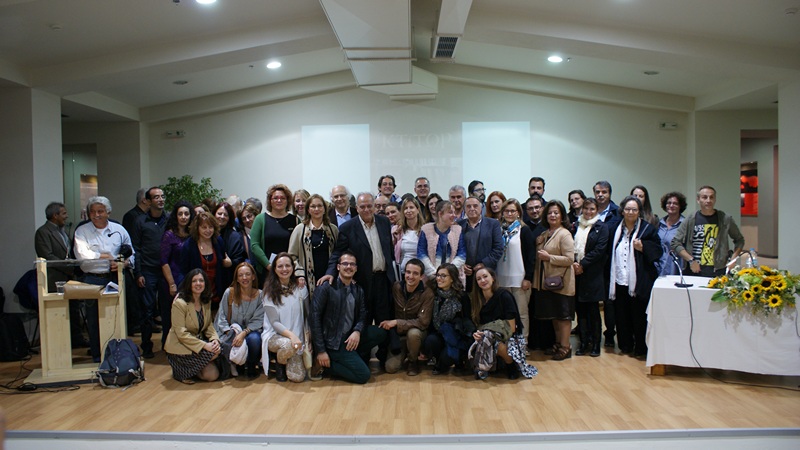 On October 4-7, 2017, an International Academic Symposium in honor of Prof. Emeritus of Byzantine Archeology, Dr. Georgios Velenis (University of Thessaloniki) was successfully held in Thessaloniki at the Ancient Agora amphitheatre. This was a place to which the honored professor was inseparably linked, as he was the head of a research program for the study of the restoration, formation and promotion of this archaeological site.

The great success of the symposium was demonstrated by the participation of 130 speakers from Greece and abroad, who presented original papers on Byzantine and post-Byzantine history and archeology, architecture, painting, sculpture, miniature and epigraphic. At the end of the symposium, an honorary event dedicated to Prof. Dr. Georgios Velenis was organized and, in an atmosphere of emotional intensity, a festschrift volume with 37 important studies was offered by a group of his disciples to the distinguished professor, as “a small gift to the person who taught them to love history and archeology.” The volume’s purposeful title “KTITOR” is an indication of the tireless professor who, with love, patience and devotion, “defined” a whole generation of young scholars in his own spirit.

As noted in the prologue of the volume, “although all the articles do not represent the whole of the ‘disciples,’ they adequately represent Georgios Veleni’s richness with regard to his scientific interests,” which have been many in various scientific fields, such as “ecclesiastical and secular architecture, fortification, urban planning, epigraphy, paleography, history, theology, painting, archeology.”

It should be noted that the studies of the honored professor are characterized by original thinking, boldness, methodicality, pioneering conclusions, valuable for the promotion of the discipline of history and archeology at local and international level.

The symposium was also attended by the Director of the Department of the Research, Management and Conservation of Byzantine and post-Byzantine Monuments and Relics of the Volos Academy of Theological Studies, Mrs. Maria Nanou, theologian-historian of Byzantine art, presenting a paper on “The Sourvia Monastery in Pelion: History, art and the witness of the inscriptions.” The monastery of the Holy Trinity “Sourvia” was the most important monument of the area of Pelion in the first half of the 17th century and the study of the inscriptions preserved in situ is of decisive importance as it contributes not only to the study of the history of the monument but also of the identity of the artists and painters who took over its frescoes, more or less defining the tendencies of the ecclesiastical painting to be developed in the region in the years to come.

To read the abstract (in Greek) of Mrs. Nanou’s paper click here

Click to see the program and the abstracts of the Symposium.

To see the cover of the festschrift volume, click here