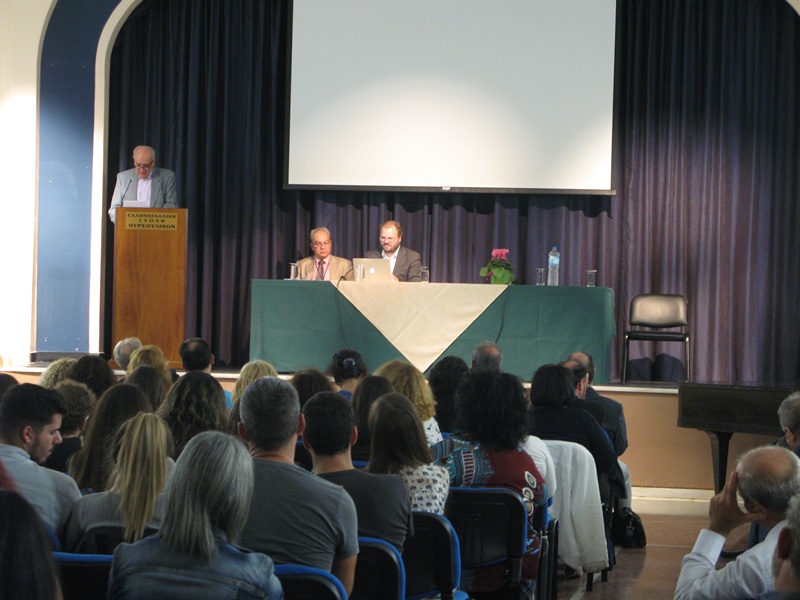 On October 6-8, 2017, the first Panhellenic meeting of the theological association Kairos was successfully held in Athens (in the Greek-French School of Ursulines) on the general theme: “Orthodox Church and identities in contemporary world.” Following the current debate about the character of the curriculum of the class of religion in the public educational system, the main purpose of the meeting was to discuss the role of the Church and the theacher of religious education in the context of modernity / post-modernity and the extent to which the identity of the Orthodox Christian is defined through the function and the structures of the modern liberal democratic state.

At the beginning of the meeting greetings were given by Dr. Stavros Yangazoglou (Counsellor, Ministry of Education, Recearch and Religious Affairs, on behalf of the Minister of Education, Research and Religious Affairs), the Deputy Head of the department of education of the New Democracy party and Member of the Parliament, Yannis Andrianos, and the President of the School of Theology of Athens University, Professor Thomas Ioannidis, who also read a Greeting on behalf of the President of the School of Social Theology of the same Faculty, Professor Sotirios Despotis. Dr. Dimitrios Moschos, the President of the Board of Directors of “Kairos” and Associate Professor of the School of Theology of the University of Athens opened the meeting by describing the character and position of the association within the current theological and educational reality.

During the first day, distinguished thinkers and theologians reflected on the general theme “Orthodox Church and Identities in contemporary World” in an attempt to explore theologically and psychologically the identity making in a world of rapid social and geographical upheaval. The central talk was delivered by Dr. Radu Preda, Professor of Orthodox Social Theology at the Orthodox Theological Faculty of Babes-Bolyai University (Cluj-Napoca, Romania), who spoke on “Orthodoxy between totality, totalitarianism and diversity.” During the subsequent round table on the topic “Orthodoxy and modern society: from adherence to identity to openness to ecumenism,” speakers included: Dr. Aikaterini Tsalambouni, Assistant Professor of the School of Social and Pastoral Theology of the University of Thessaloniki (“The Identity of the Orthodox in the world of rights, racial equality and representation”), Dr. Ioannis Bekos, Academic Stuff at the University of Cyprus (“Religious neutral secular state and Liberalism: For or against the Orthodox Christian?”), and Dr. Thanos Lipowatz, Professor Emeritus of Political Psychology at the School of Political Science and History of Panteion University (“The Identity of the individual in Late Modernity and the role of Christianity”).

In the morning of the second day of the meeting, a round table took place on the topic “Discussing the Identity of Orthodoxy Today,” where speakers included: Dr. Pantelis Kalaitzidis, Director of the Volos Academy for Theological Studies, (“The Orthodox identity between continuity and discontinuity, purity and reception of the world”), Rev. Dr. Dimitrios Bathrellos, Visiting Professor at the Institute for Orthodox Christian Studies, Cambridge (“Beyond monarchy and individualism: Synodality and how it (should be) understood today”), and Dr. Athanasios N. Papathanasiou, Editor-in-Chief of the journal Synaxis (“The identity of the Orthodox Church towards religions”).

The theological meeting continued and concluded with parallel thematic educational and pedagogical workshops (“Orthodoxy and Gender: Teaching Techniques and Educational Drama,” “Synodality: Text selection Criteria and Teaching Techniques,” “State and Church,” “Ecclesiastical and National Identity,” etc). The themes of the workshops were based on the preceding papers, while their elaboration followed the use of teaching techniques and learning strategies that can support the development of modern theological discourse in the classroom, as proposed by the new curricula of the class of religion.

For more details, as well as photographic material from the meeting please visit the official website of the association Kairos: http://www.kairosnet.gr/news/general