Completion of International Conference ORTHODOX CONSTRUCTIONS OF THE EAST 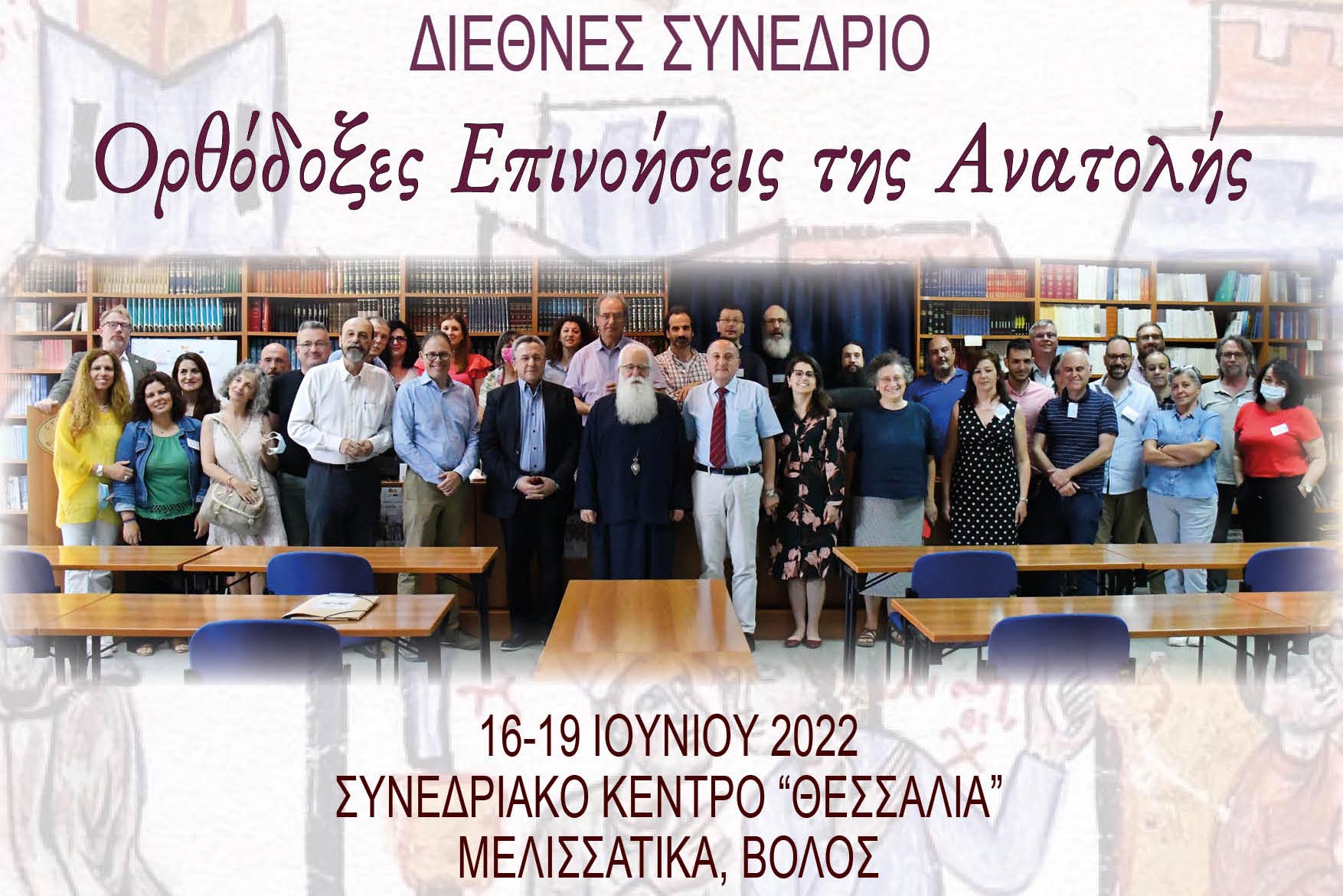 On Sunday, June 19, 2022, the International Conference on “Orthodox Constructions of the East” was completed. The Conference was held at the Conference Center “Thessalia” in Melissatika, Volos, Greece, between June 16 and 19, 2022, organized by the Volos Academy for Theological Studies in cooperation with the Orthodox Christian Studies Center of Fordham University (New York, USA), the Chair for Orthodox Theology of the University of Münster (Germany), the Sankt Ignatius Orthodox Theological Academy (Stockholm, Sweden), the Institute for the Study of Culture and Christianity (Beograd, Serbia), the Center for Philosophy and Theology of Trebinje (Bosnia-Herzegovina), the Biblical Theological Institute of St. Andrew (Moscow, Russia), the Romanian Institute of Inter-Orthodox, Inter-Christian and Inter-Religious Studies (INTER, Cluj-Napoca, Romania) and the European Forum of Orthodox Theological Faculties (EFOST, Bruxelles). The conference focused on questions such as the significance of the elements that define the idea of the “East” and the formation of the idea of the “East” through basic features of Orthodoxy, setting forth questions about the existence of a phenomenon of “construction” or “invention”. 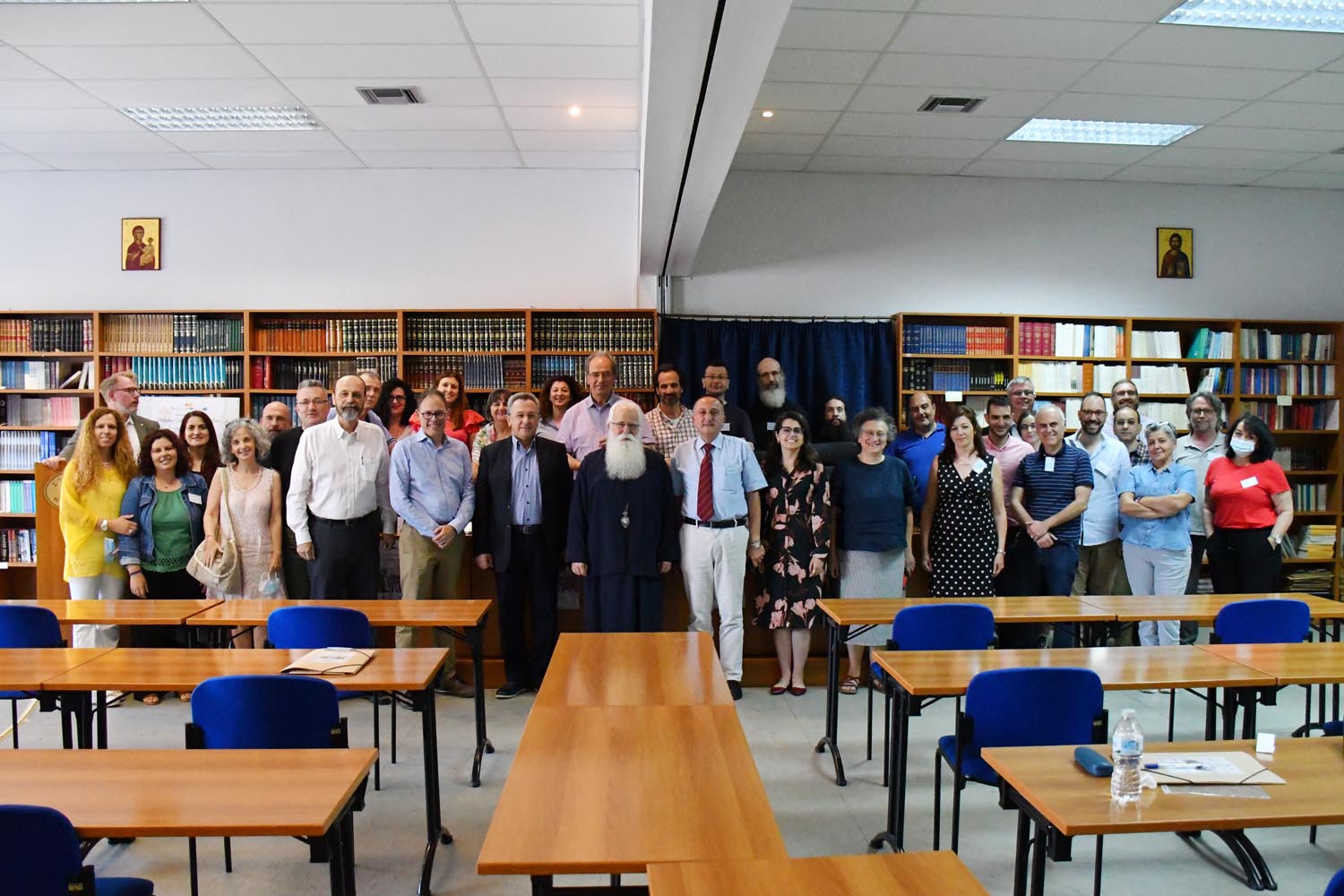 The first day of the Conference started with welcoming messages by His Eminence Ignatius, Metropolitan of Demetrias and Almyros, and the Director of Volos Academy, Dr. Pantelis Kalaitzidis. 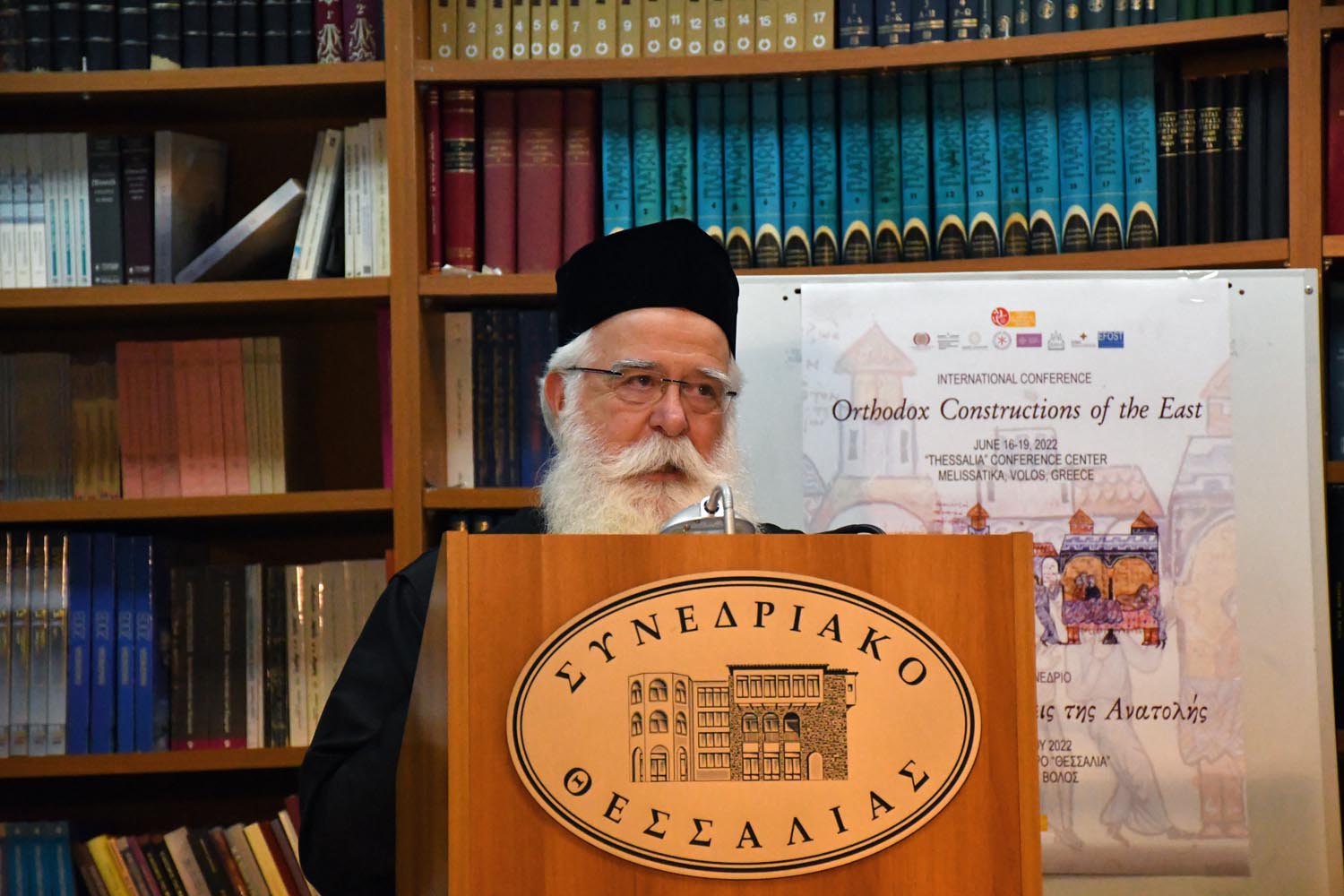 The keynote speech was delivered by the esteemed Greek theologian and philosopher Dr. Christos Yannaras (Professor Emeritus, Panteion University of Political Sciences, Athens, Greece), who spoke on the construction of the idea of the East via the Philokalia and The Rudder. Professor Yannaras stressed the gradual transformation of the Canons of the Church into normative provisions with legal connotations, and commented on the reception of Philokalia in the West, arguing that Philokalia was resonated with an individualized version of Christianity, which is typical for the West. 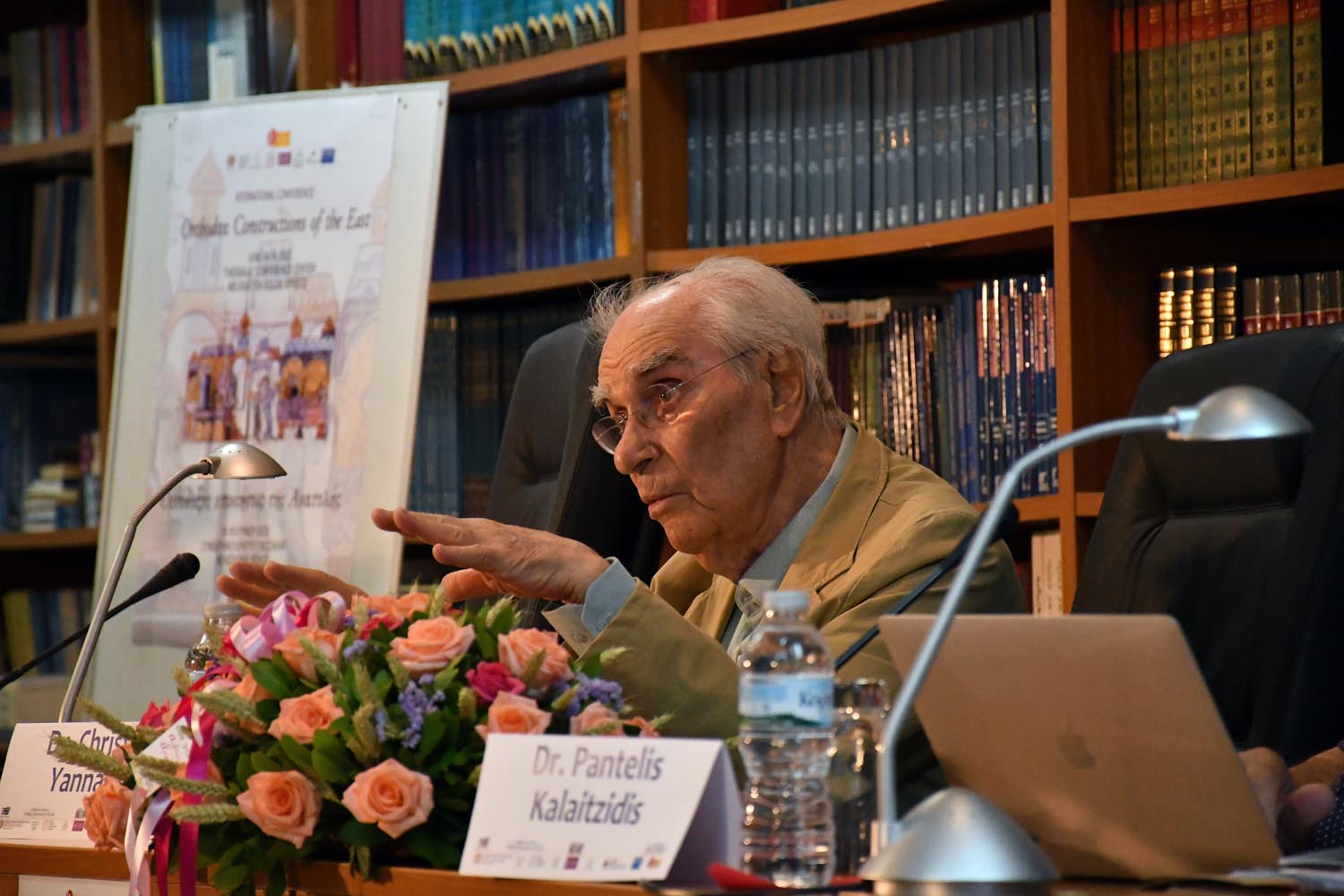 The next day Dr. Ekaterini Tsalampouni (Associate Professor, Faculty of Theology, University of Thessaloniki, Greece) opened the first session talking about the Idea of the East via the Dialectics between New Testament and Patristic Theology, pointing out the ongoing problem of the public ecclesiastical discourse, which treats the biblical text as evidence and also the tendency of many academic theologians to ignore the discoveries of contemporary biblical research. 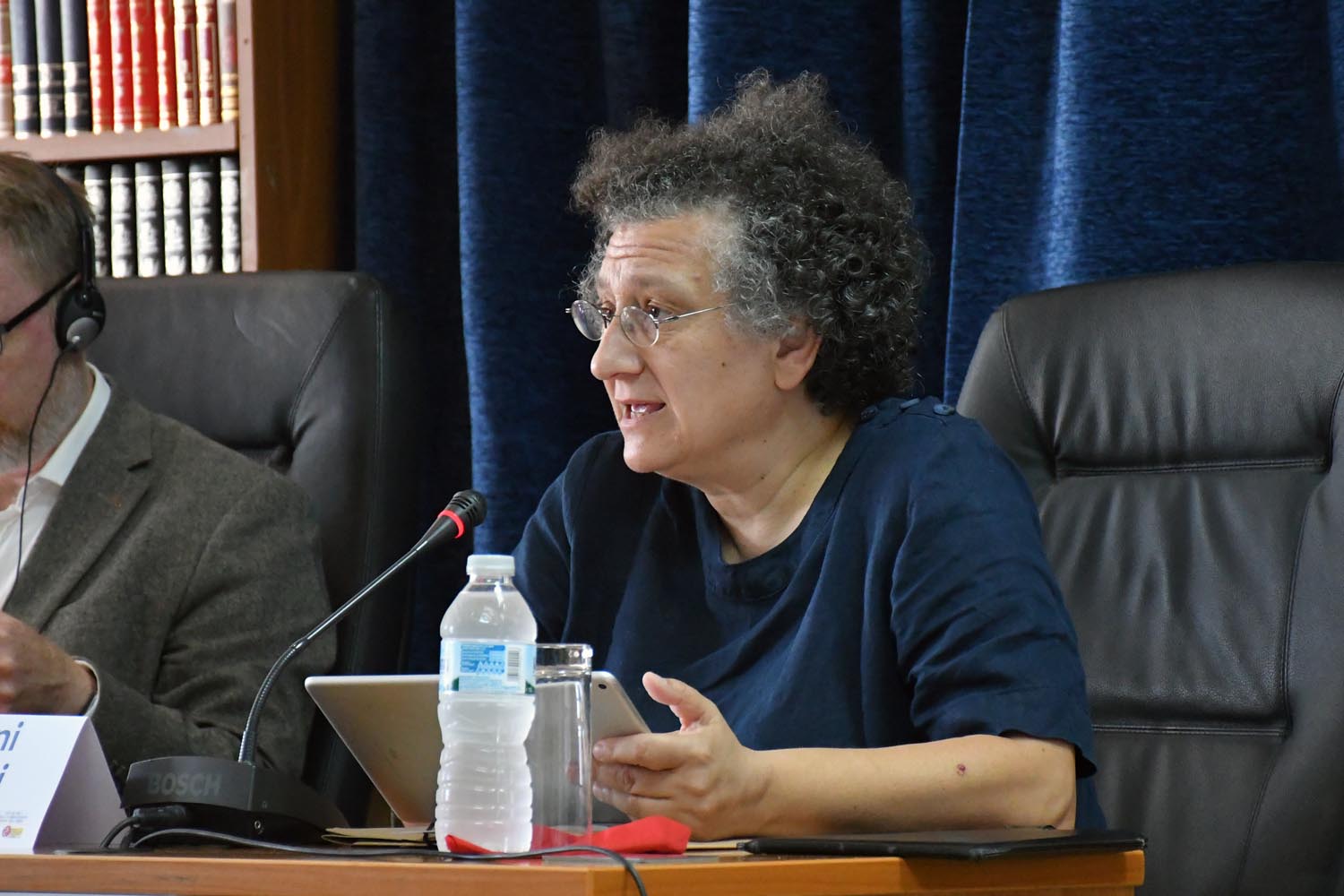 The next speaker, Dr. Assaad Elias Kattan (Chair of Orthodox Theology, Münster University, Germany), devoted his lecture to the reception and interpretation of Maximus the Confessor in East and West, underlining that St Maximus was used by theologians in order to draw boundaries between an “orthodox” East and a “heretical” West. 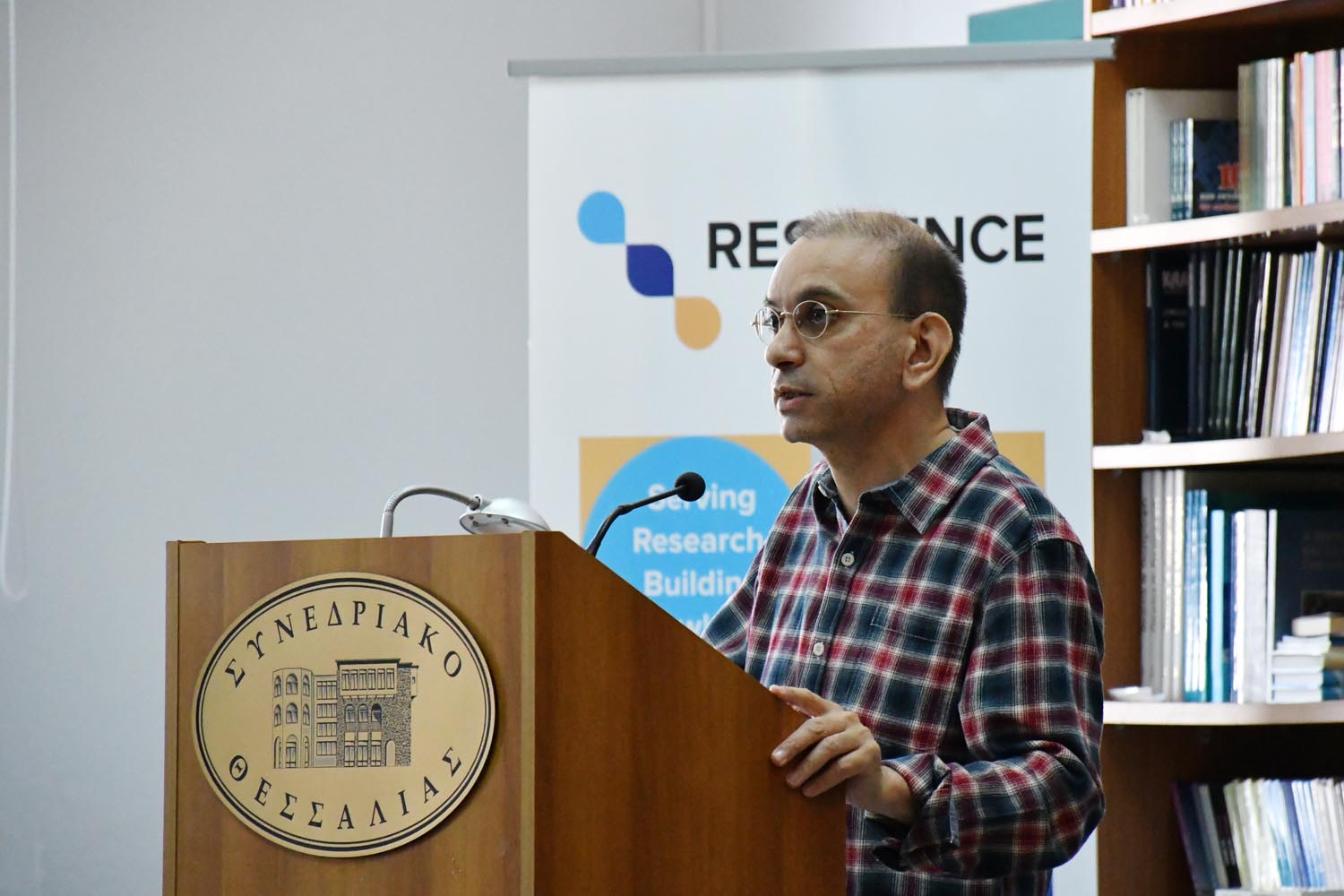 The third speaker, Dr. Vasilios N. Makrides (Professor, Erfurt University, Germany) spoke about the Construction of the East in the Context of Orthodox Monasticism. In his lecture he stressed that Orthodox monasticism has played a central role in its various manifestations and cultural settings in outlining a particular idea of the East and its promotion as a unique and exclusive version of the genuine Orthodox faith and practice, which is characterized by the phenomenon of elderism and some sort of aggressiveness. 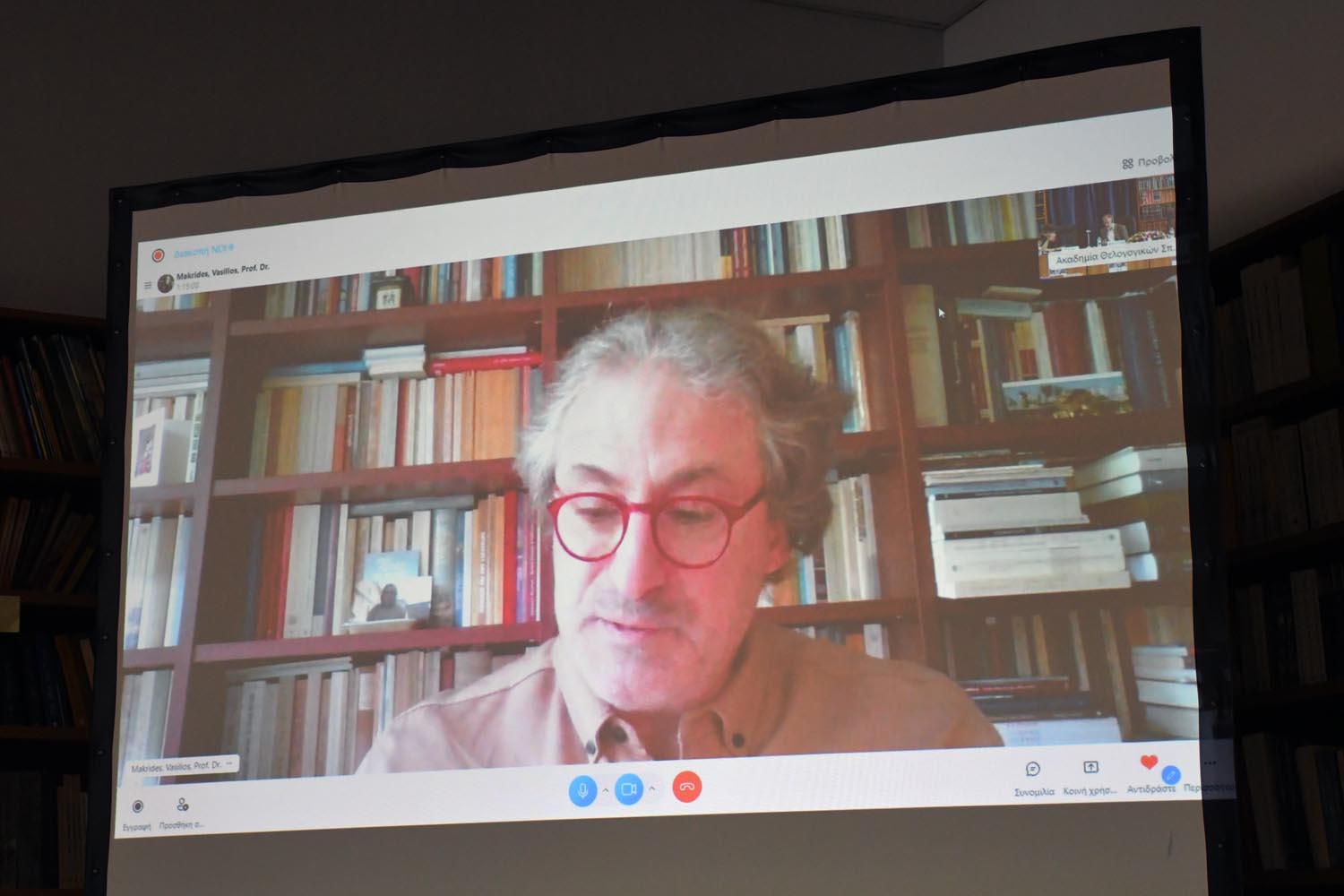 The first speaker of the second session, Dr. Elias el Halabi (Associate Director of the Sheikh Nahayan Center for Arabic Studies and Intercultural Dialogue, Balamand University, Lebanon), examined the idea of the East in an Islamic context and analyzed it from an identity perspective. In his speech, he showed how this identity is shaped by both the constructive and destructive encounters between two monotheistic religions, Islam and Eastern Orthodoxy. 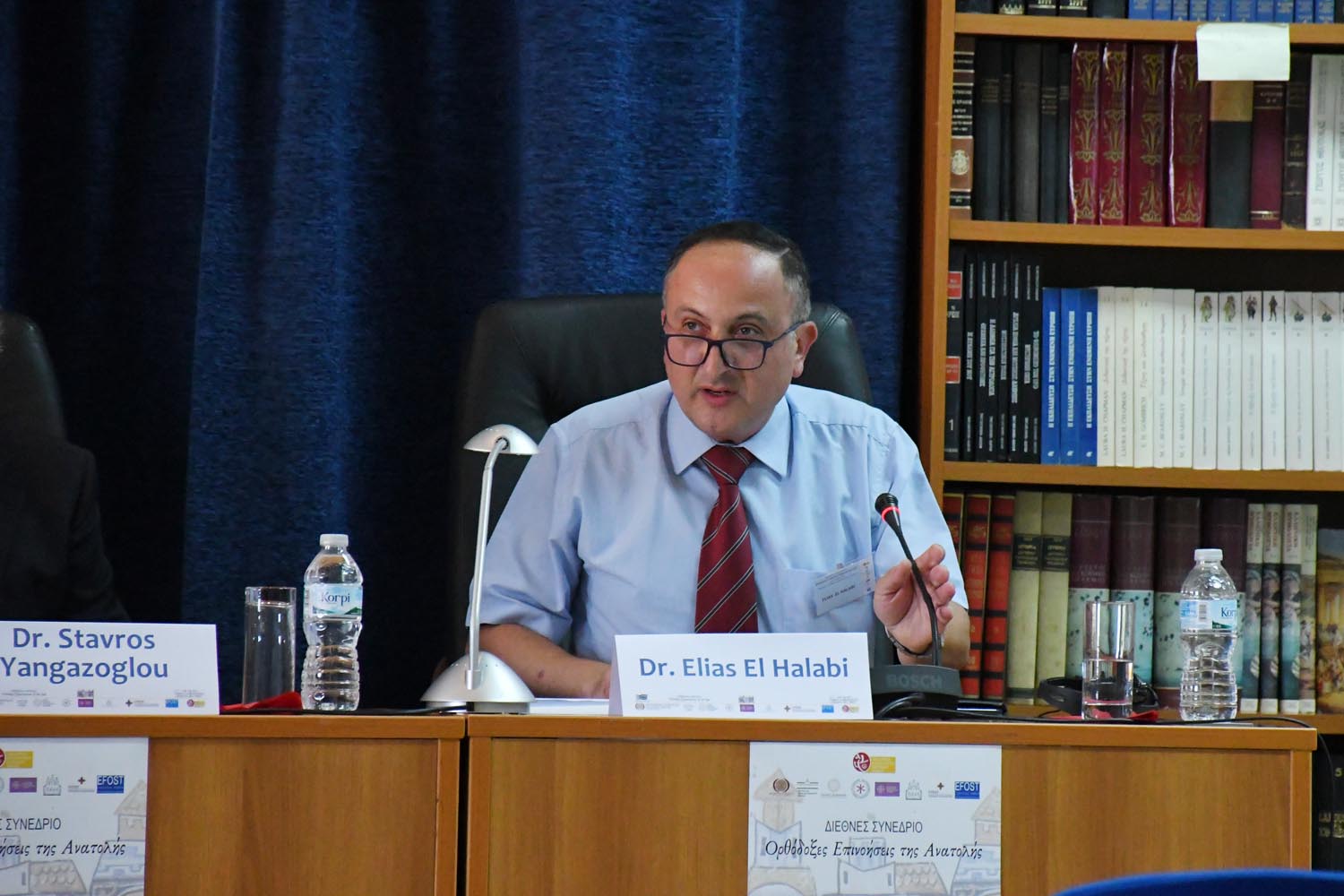 Dr. Stavros Yangazoglou (Assistant Professor, Faculty of Theology, University of Athens, Greece), talked about the idea of the East and Anti-Westernism in the context of St. Gregory Palamas’s theology, pointing out the need to understand the theology of St. Gregory Palamas from the perspective of a fruitful encounter between East and West and not by continuously promoting this great Orthodox byzantine theologian and his teachings as the perfect opponent to the Roman Catholic and Western Christian theology in general. 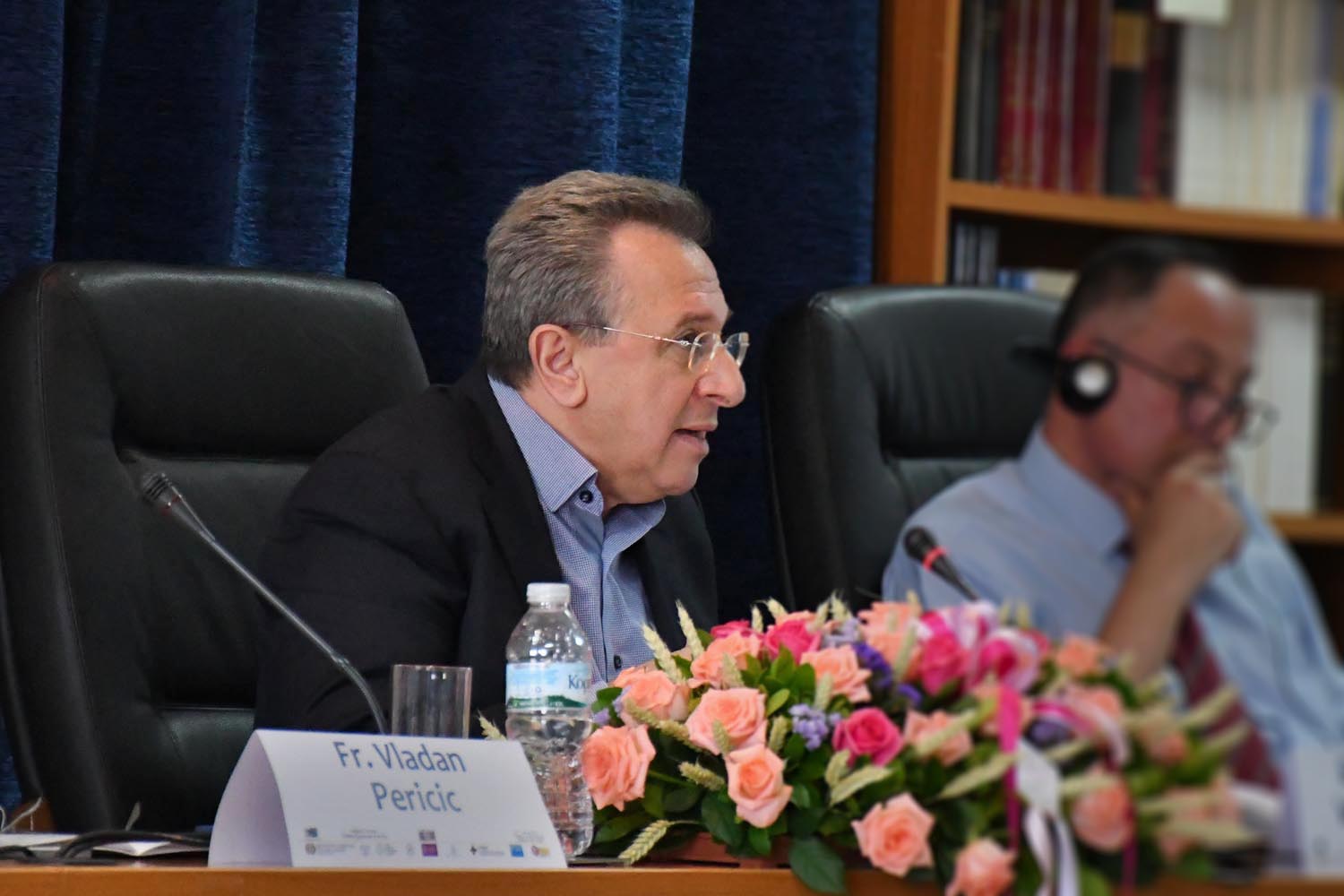 The next speaker, Dr. George Demacopoulos (Co-Founding Director of the Orthodox Christian Studies Center, Fordham University, New York, U.S.A.), made an interesting parallelism between the conception of the Emperor in the Byzantine Empire, taking as example Justinian I, with Vladimir Putin and the “Russian world”, highlighting the central role of the leader in these two worlds. 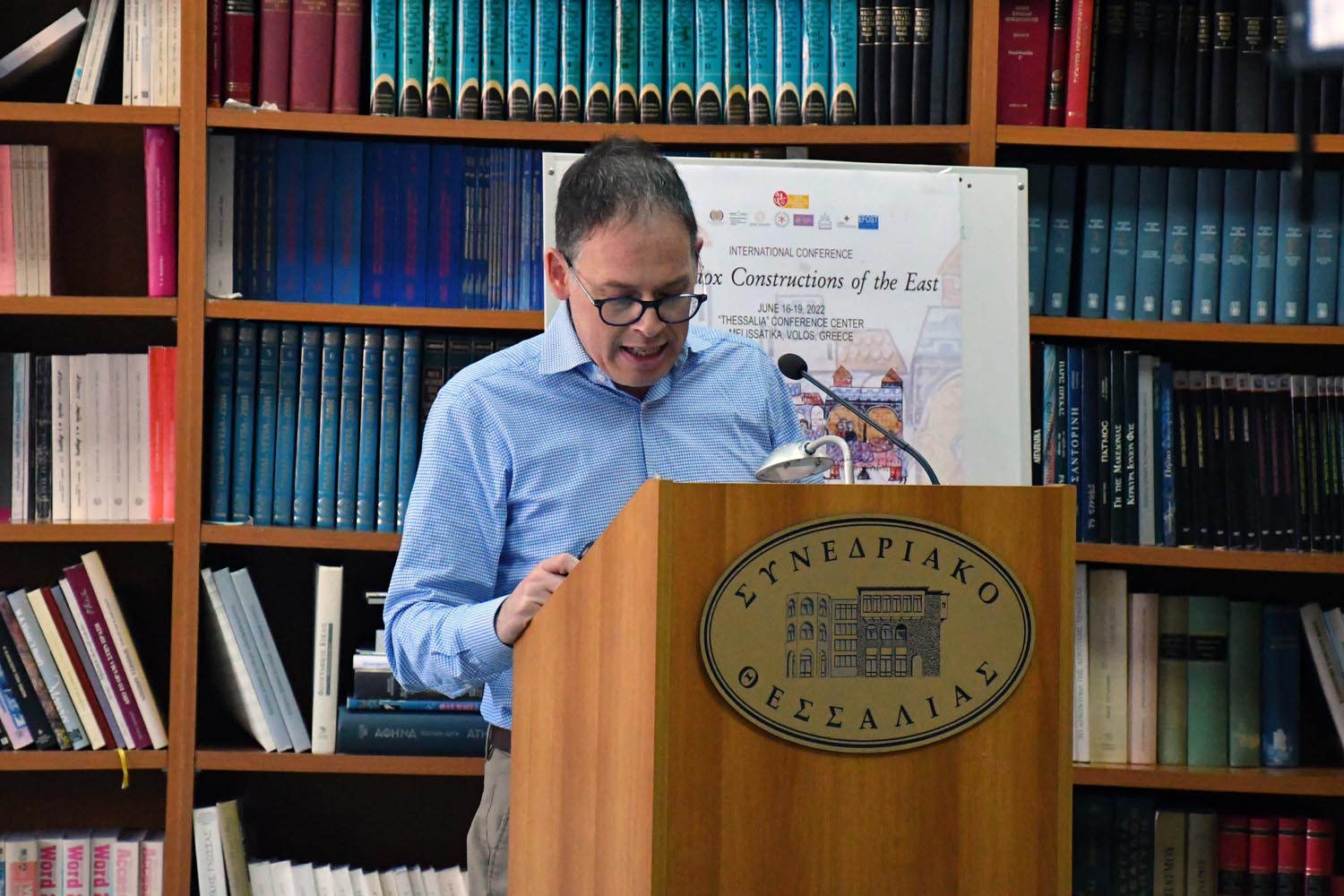 In the third and final session of this day the floor was taken by Dr. Michael Hjälm (Dean, Sankt Ignatios Orthodox Theological Academy; Assistant Professor of Uppsala University, Sweden), who analyzed the idea of the “Russian World” in the context of topophilia showing how a certain place can have close ties and be a point of reference for a particular nation. According to him topophilia can lead to peace and reconciliation but also to war and aggression at times. 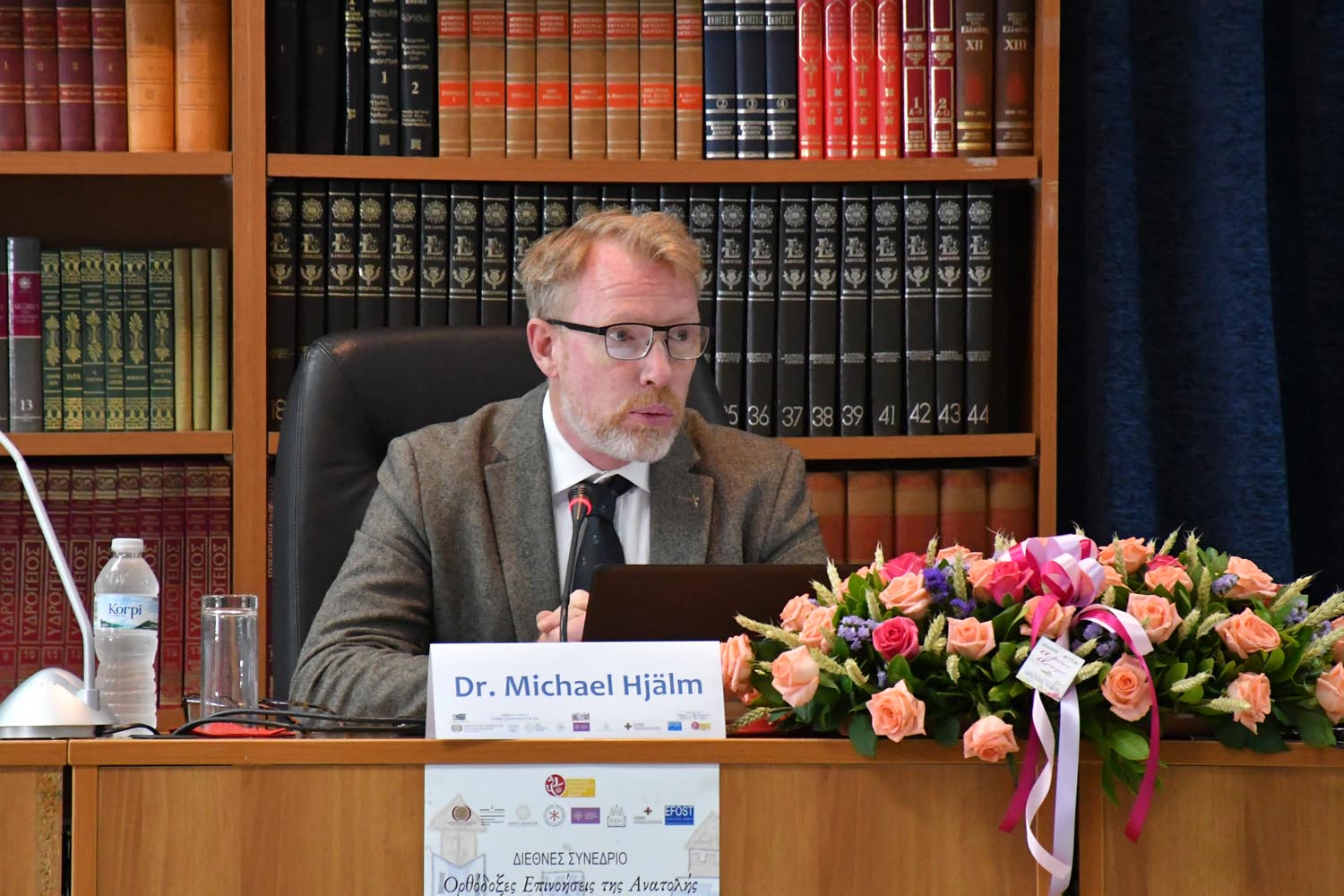 The last speaker for this day was Dr. Perry Hamalis (Professor of Religious Studies, North Central College, Illinois, U.S.A.) who spoke about the Construction of the idea of the East via the idea of “Symphonia”, analyzing the three ways of response of the contemporary Orthodox Christians to this old model: the neo-byzantine, the liberal democratic and the eschatologically anarchistic. 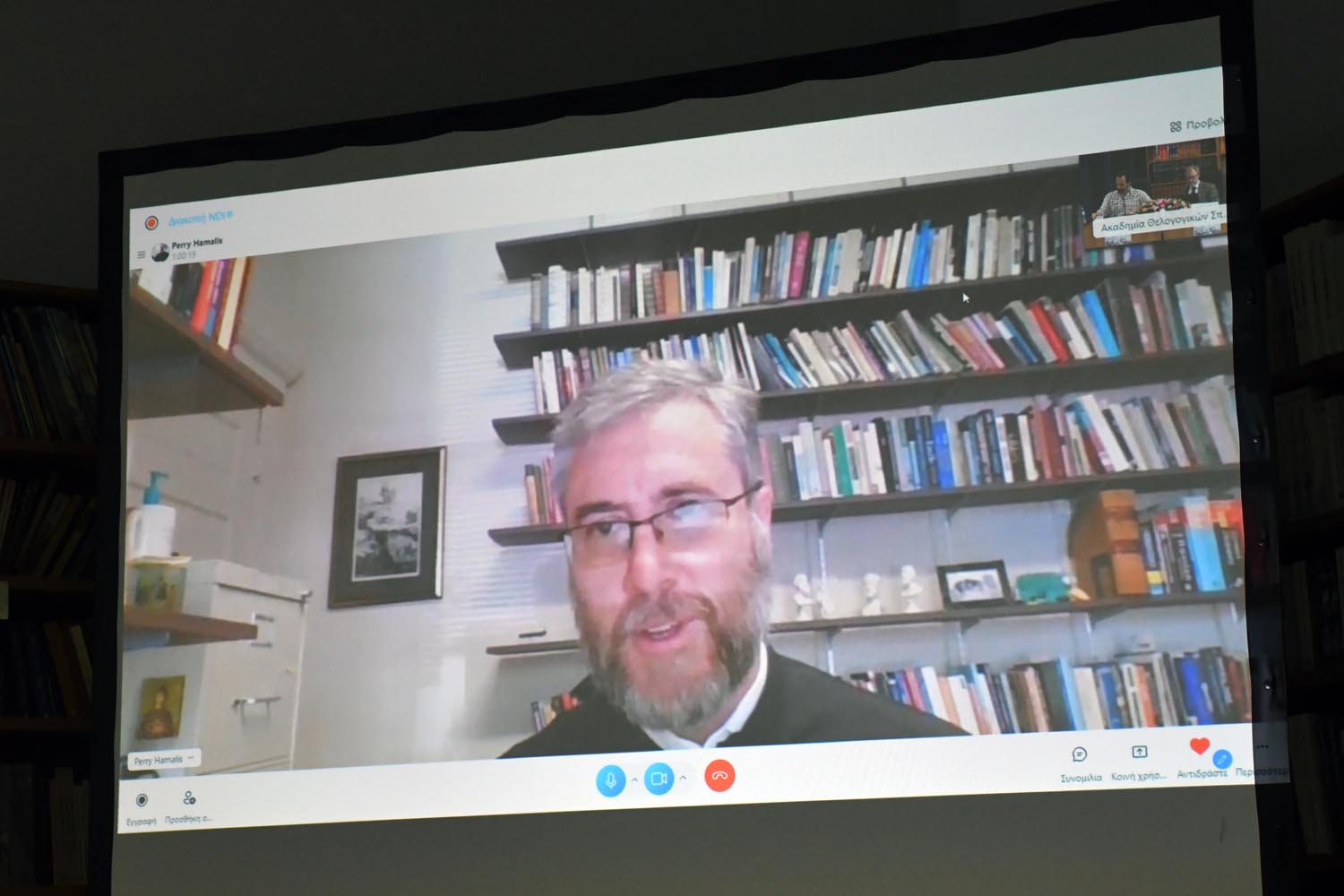 At the end of this session, a fruitful discussion developed. Dr. Pantelis Kalaitzidis suggested that we should not hesitate to call out the “Russian World” a heresy, as the characteristics of this idea fit perfectly with the principles of ethnophyletism, which was condemned by a local Council held in Constantinople in 1872. Moreover, Dr. Pantelis Kalaitzidis underlined that eschatological anarchism annuls and surpasses any entrenchment of Orthodox theology to a modern political ideology, of left or right wing. Dr. Aristotle Papanikolaou claimed that scholars who sympathize more with an anarchist political perspective are not essentially differentiated from those who support a liberal democratic one. Dr. Džalto contested this argument by saying that an anarchist perspective does not adhere to the principles of private property and capitalism, thus it is far from the liberal democracy as understood today.

In the third day, Dr. Regula Zwahlen (Director, Sergii Bulgakov Research Center, University of Fribourg, Switzerland) demonstrated how the Slavophile movement constructed the idea of the (mainly Russian) East. Slavophiles were influenced by Western romanticism, so they used Western ideas to criticize the West and constructed an Eastern identity based on the principle of Sobornost, which allegedly opposed the “western individualism”. 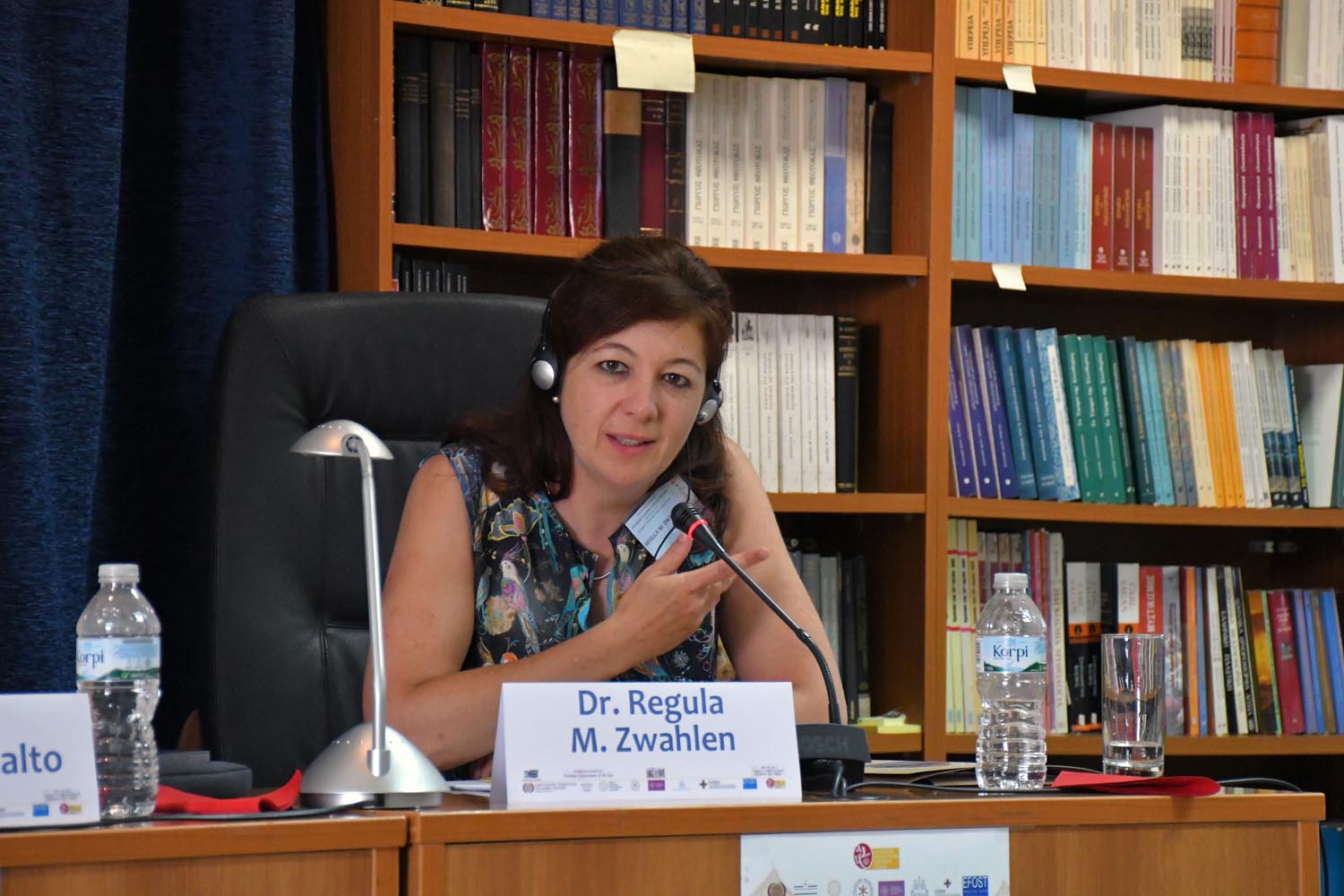 The next speaker, Revd. Dr. Demetrios Bathrellos (Visiting Professor, Institute of Orthodox Christian Studies, Cambridge, UK) analyzed the concept of Eucharistic ecclesiology and its instrumentalization in criticizing the West. He also pointed out that despite the expectations of many theologians, Eucharistic Theology failed to transform several problematic aspects of ecclesiastical practice. 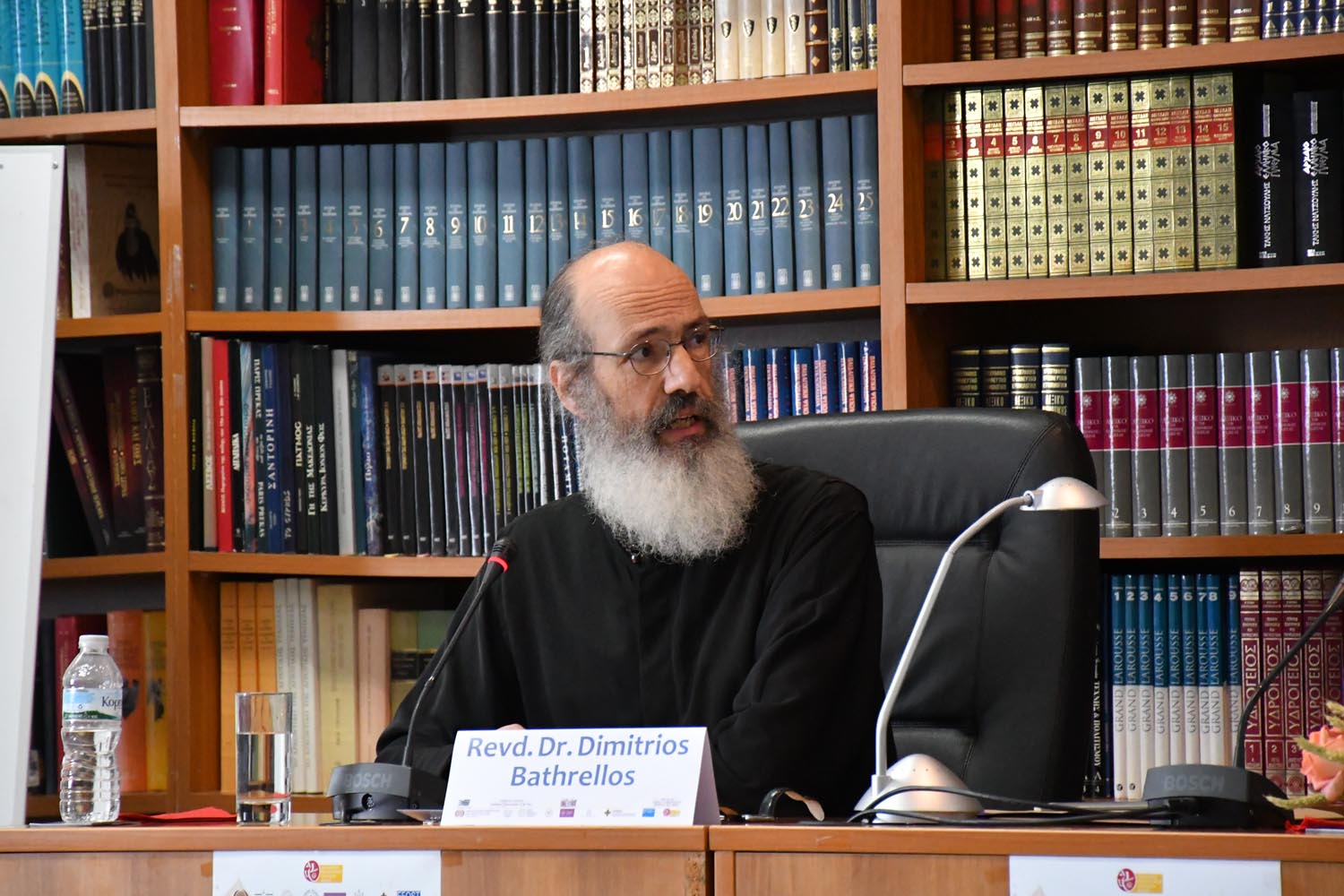 Right after, Dr. Vukašin Milićević (Associate Professor, Faculty of Orthodox Theology, University of Belgrade, Serbia) examined the construction of the idea of the East via the issue of the Calendar, which, in the case of the Serbian Patriarchate, has been transformed into an issue of identity, although the Serbian Patriarchate was initially inclined to accept the move to the New Calendar. 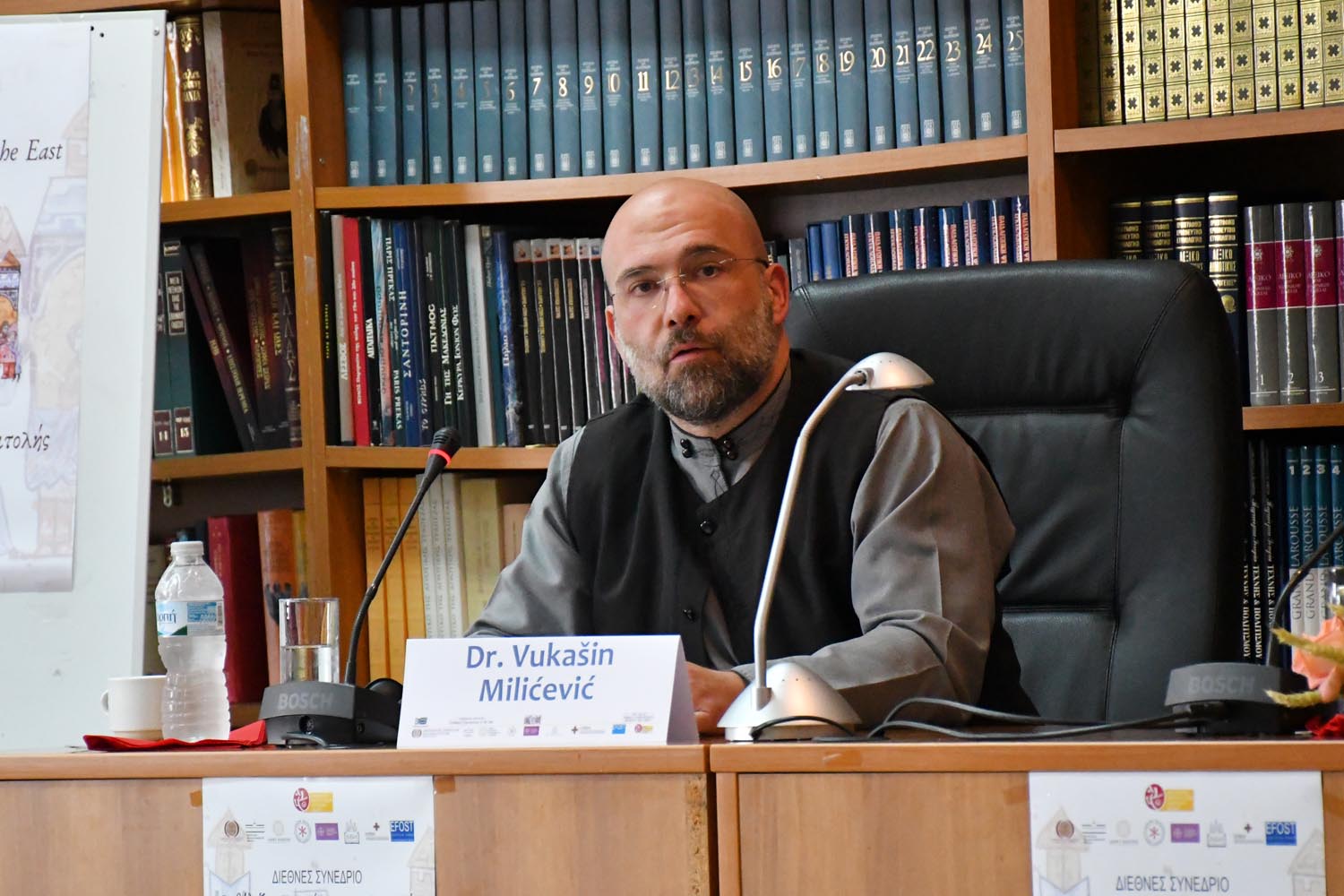 Dr. Davor Džalto (President of the Center for the Study of Culture and Christianity Belgrade, Serbia; and Deputy Dean, Sankt Ignatios Orthodox Theological Academy, Sweden), the next speaker, devoted his speech to the so-called “Eastern” aspects of traditional Orthodox iconography, presenting the revival of the “Byzantine” style in icon painting and its established status within the Eastern Orthodox tradition, which nowadays has become sort of canonical. In the discussion that followed, Prof. George Demacopoulos pointed out that, following the last three speeches, Orthodox Christians seem to derive their identity from their permanent opposition to the West. 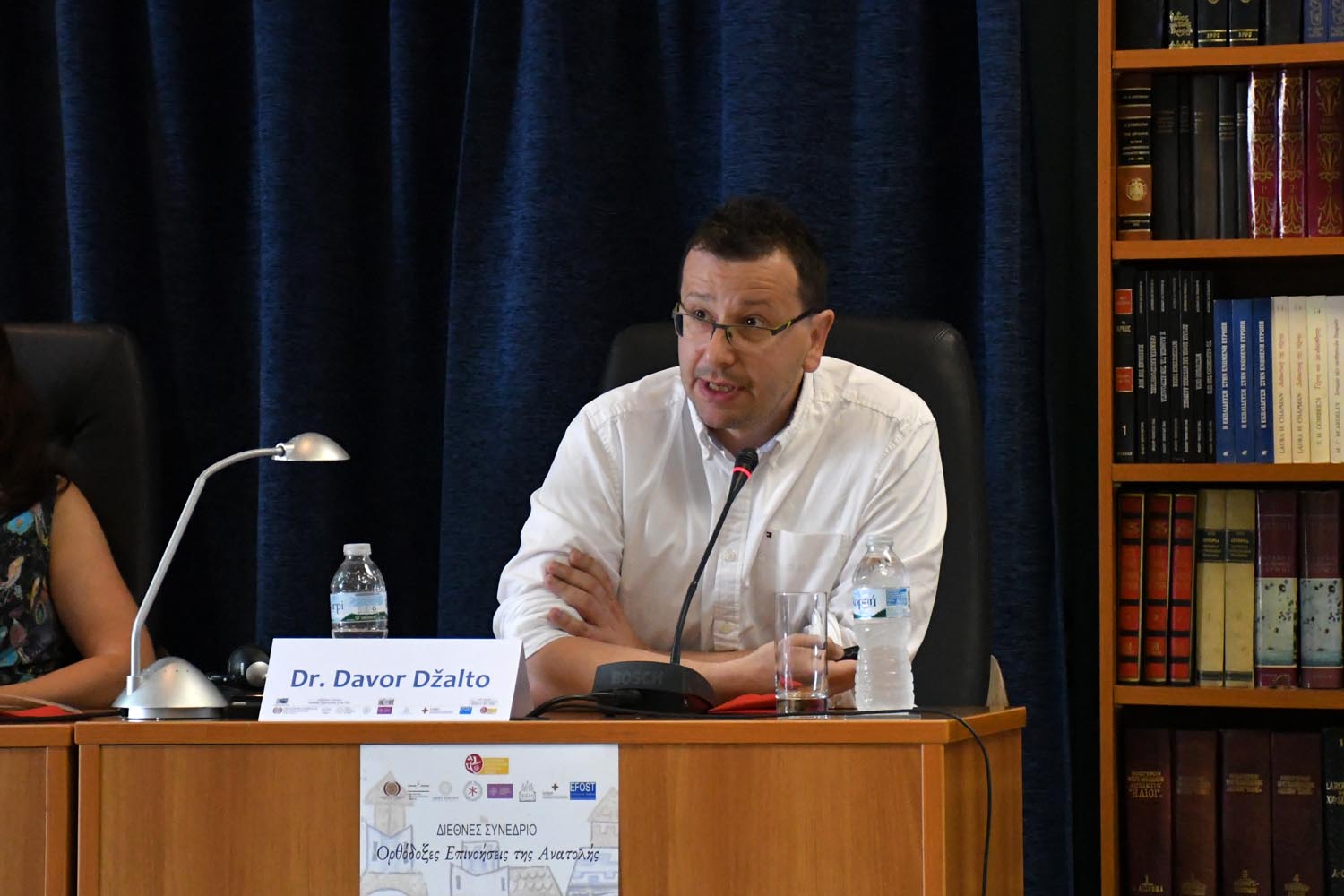 In the last session, the Director of Volos Academy for Theological Studies, Dr. Pantelis Kalaitzidis, focused on the construction of the idea of the East through mystical theology and apophaticism, as points of differentiation from the West, with Vladimir Lossky as the most characteristic representative of this tendency, whom the speaker contrasted to Fr. Georges Florovsky.

Dr. Candace Lukasik (Assistant Professor of Religion, Mississippi State University, USA) devoted her talk to the community of Coptic Christians in the USA, highlighting the fact that although American Evangelicals used the Coptic Christian experience in order to present a Christianity as a persecuted religion, they continue to treat Coptic Christians as “Eastern”, non-white others, in everyday interactions within American society. 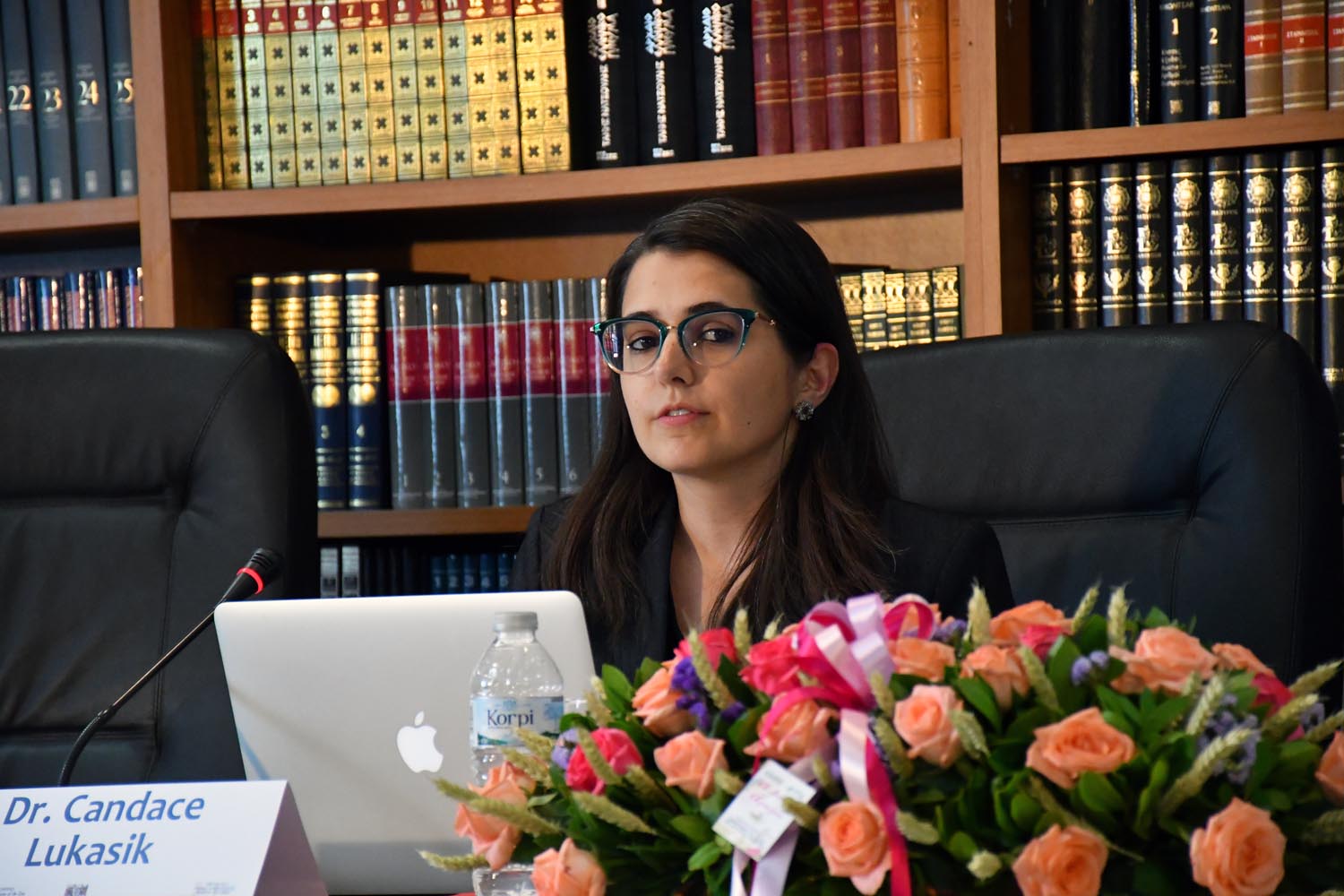 Dr. Sarah Riccardi-Swartz (Assistant Professor of religion and anthropology, Northeastern University, USA) explored in her paper the growing movement of converts to Russian Orthodoxy in the United States in conjunction with the rise of conservative American Christianity. Her presentation focused on the digital manifestation of religion, the conservative social politics and the history of American exceptionalism to demonstrate that spiritual conversion has a deeply political nature. 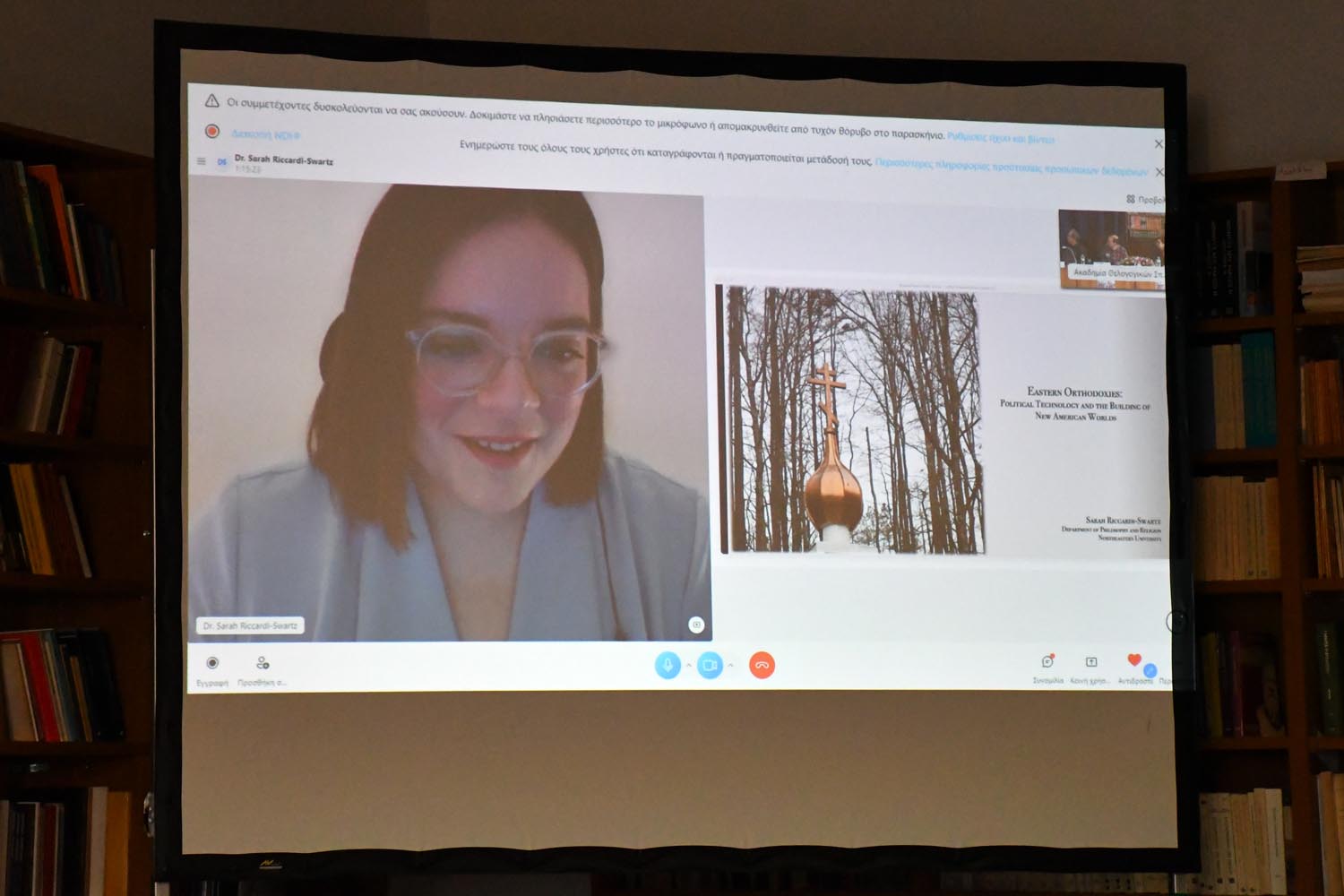 The Conference reached its end with the remarks of the Ecumenical Observers. 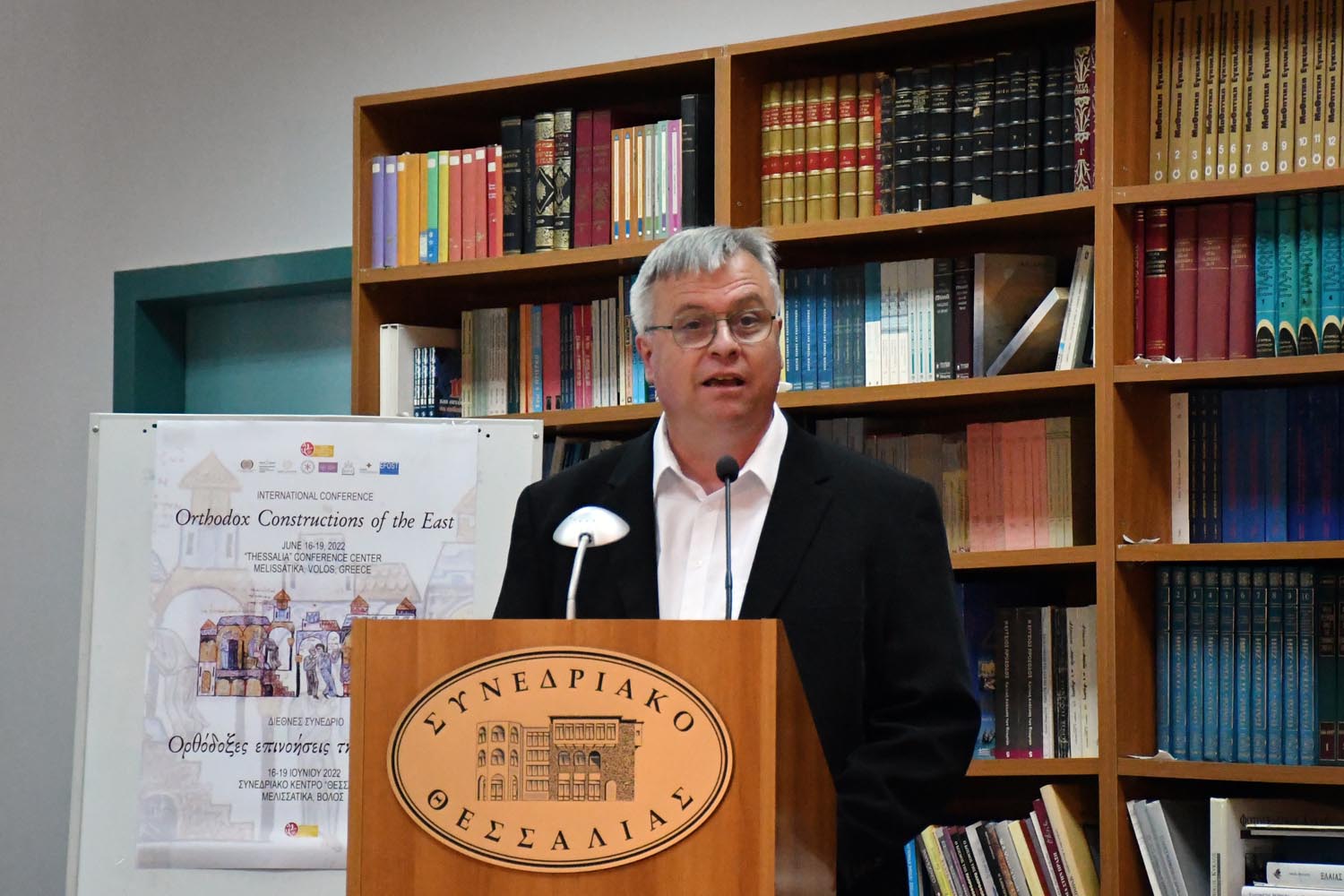 Dr. Peter de Mey (Professor and Vice-Dean, Faculty of Theology and Religious Studies, Leuven, Belgium) pointed out that Fr. Georges Florovsky's theory of the “Babylonian captivity” of the Orthodox theology under the Western theology seems to have been overcome today, while Revd. Dr. Panagiotis Kantartzis (Visiting Professor at Greek Bible College, Director of the Institute for the Study of Eastern Orthodox Christianity, Athens, Greece) pointed out the importance of the Orthodox tradition for ecumenical Christianity as a whole, since Orthodox tradition is considered to be closer than any other to ancient Christianity. 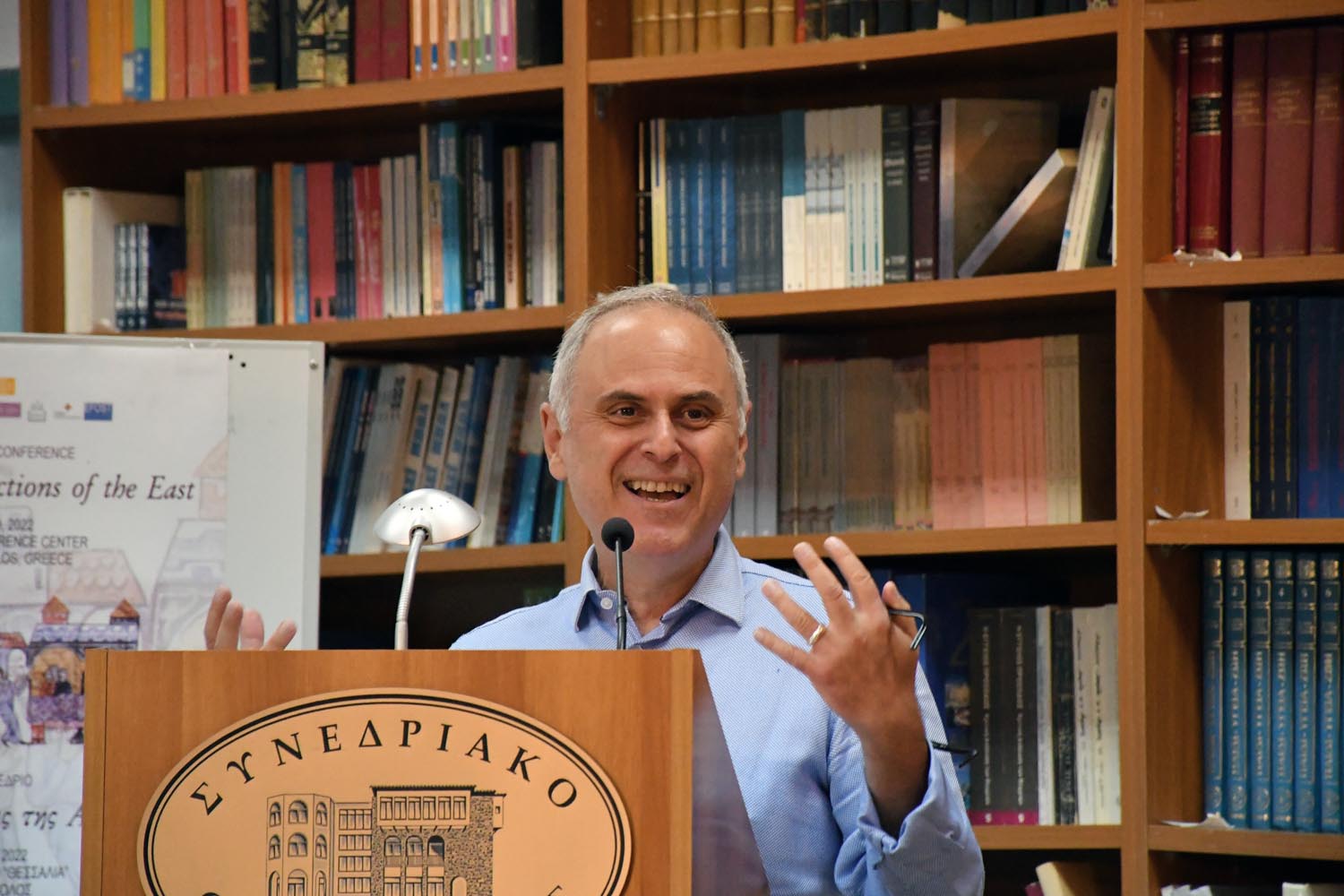 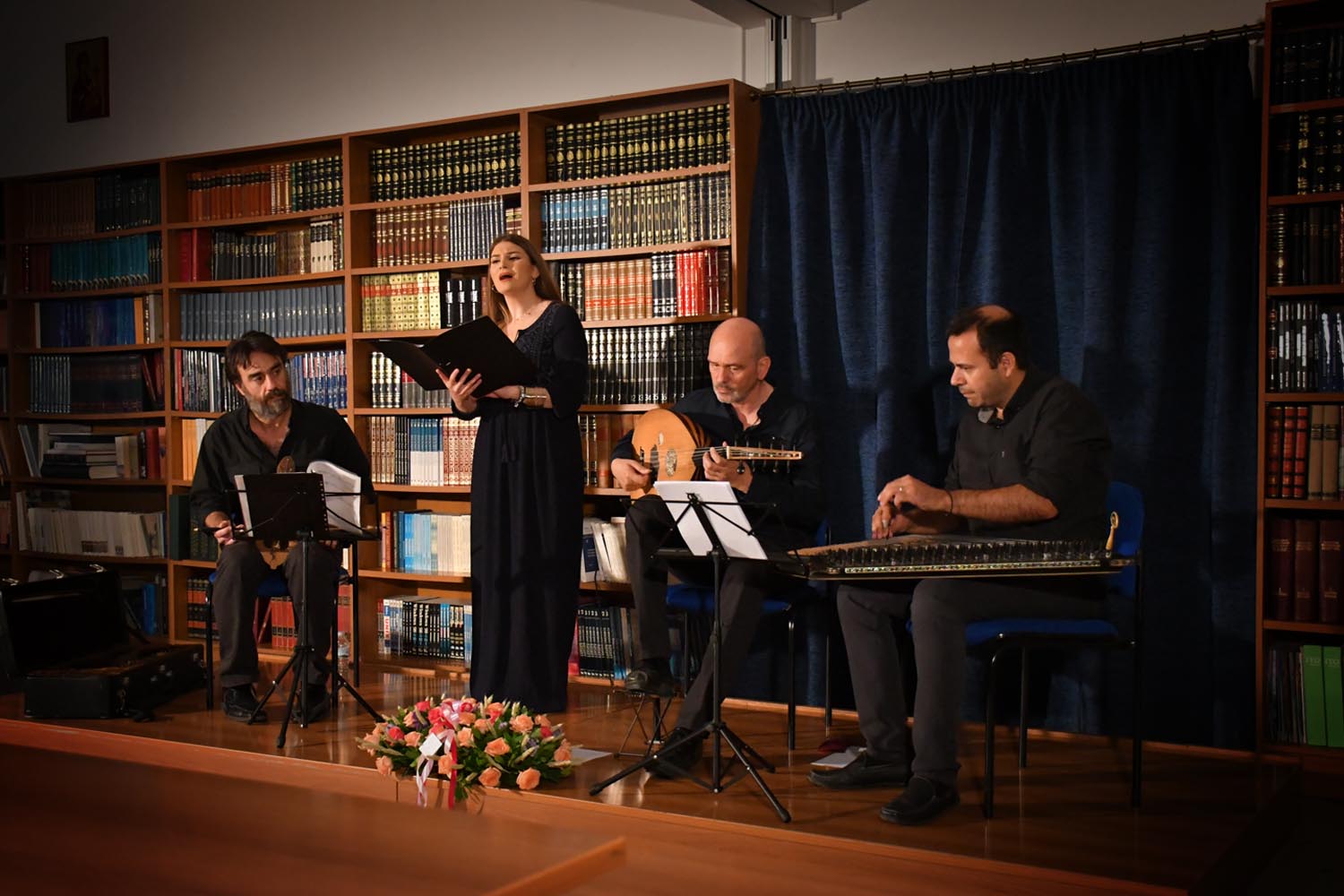 The evening ended with a small concert of the Kyriakos Kalaitzidis “En Chordais” quartet, dedicated to the music world of the Eastern Mediterranean, and the Conference concluded on Sunday, with the morning Divine Liturgy at the church of St Constantine, officiated by His Eminence, the Metropolitan Ignatius. 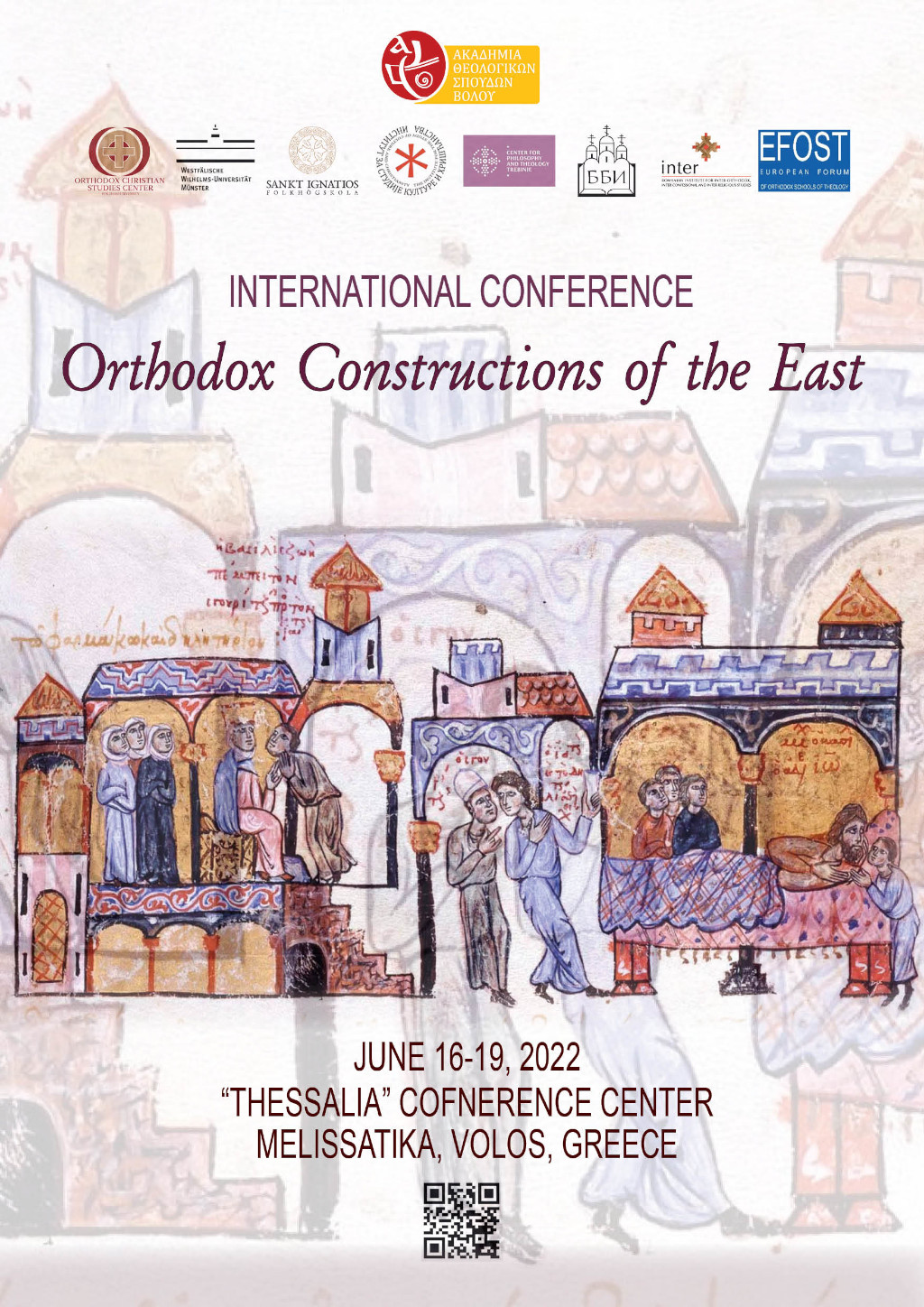