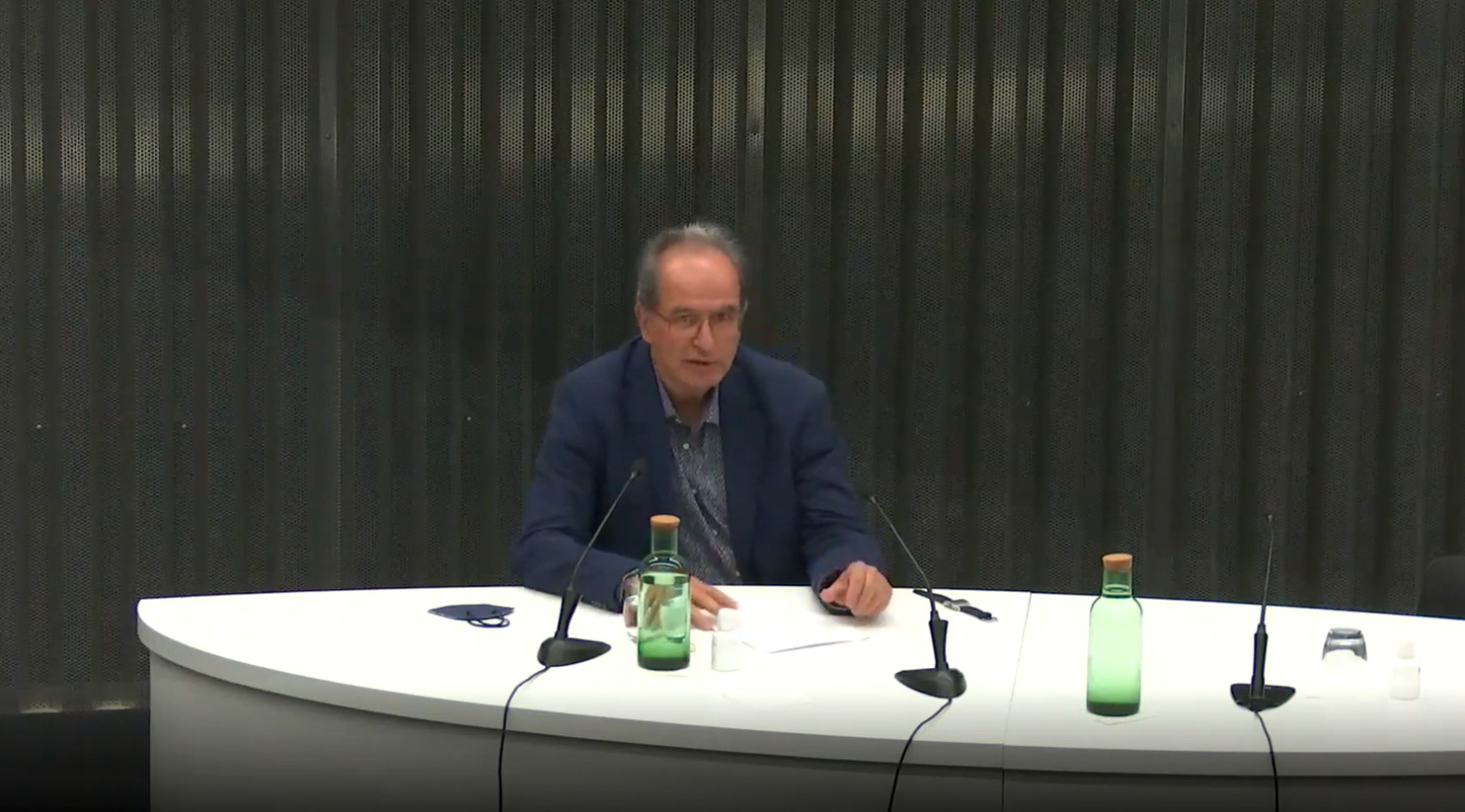 On Wednesday, May 11, 2022, a public lecture of the director of the Volos Academy for Theological Studies, Dr. Pantelis Kalaitzidis, on the topic "The war in Ukraine and the emergence of a new theological agenda in Orthodoxy" was successfully held at the Geneva Graduate Institute for International and Development Studies (Chaire Yves Oltramare pour la Religion et la Politique dans le monde contemporain). The lecture was part of the series "My religion in the city" coordinated by Professor Jean-François Bayart.

The lecture focused on the ecclesiastical dimension of the Russian invasion of Ukraine and the theory of the "Russian World" (Russkii Mir), the ideological-political narrative of Russian Orthodoxy that is also linked to the theory of the "Third Rome" and has emerged as a dominant issue since the elevation of Patriarch Kirill (Gudayev) to the Moscow Patriarchal Throne in 2009, a narrative that sanctifies the war on the basis of the common origin and inseparable unity of Russians, Belarusians and Ukrainians, beyond the existing borders and recognized states. The speaker demonstrated how the "Russian world" ends up with ethnophyletism, and how it is politically instrumentalized, denouncing the secularized West for liberalism, globalization, Christianophobia and acceptance of homosexuality.

Based on the values of a supposed and vague "tradition", this perception obviously moves in the realm of the imaginary and the "imaginary communities", in opposition to the real experience, and goes so far as to undermine the ecclesiastical order in Eastern Orthodoxy, elevating the Russian government and Church to guardians of Orthodoxy. The messianism of "Russianity", as characterized by the Lebanese Orthodox Professor Antoine Courban, represents a worldly eschatology, modeled after Marxism-Leninism.

The Moscow Patriarch's justification for the atrocities of the war, based on the teachings of the "Russian World", sparked a storm of reactions, most notably the "Declaration of the Orthodox Theologians on the Russian World" which was released on Sunday of Orthodoxy, and it is now published in twenty languages, currently collecting almost 1,500 ecclesiastical and academic signatures. As stressed in the "Declaration", it is obvious that the distinction of people on the basis of gender, religion or language, is contrary to the Gospel and the tradition of the Fathers. It is condemned, therefore, like any other teaching that introduces any racial, ethnic, cultural or other discrimination. The same spirit also characterized the condemnation of ethnophyletism by the Council of Constantinople in 1872, as the "Declaration of the Orthodox Theologians" observes.

This "Declaration", as it has been pointed out by the speaker, reflects the change in mentality of Orthodox theology during the last two decades, which ends, with the contribution of a new generation of Orthodox theologians, in the formation of a new theological agenda. The latter, without denying or disregarding the theological foundations of the Orthodox tradition or the contribution of the previous theological generation, and especially that of the neo-patristic synthesis, focuses on globalization and multiculturalism as the main challenges, Orthodoxy faces today, along with pluralism and all forms of otherness, the demand for "unity in difference", the emphasis on political theology and eco-theology, anti-Westernism and the East-West dialectic or ontology and ethics, the reflection on the relation between Orthodoxy and modernity, gender and feminist theology, and finally the critique of religious nationalism and ecclesiastical culturalism that are directly linked to the problem of Orthodox unity, as tragically demonstrated by Russia's invasion of Ukraine and the ongoing war.

Concluding, Dr. Kalaitzidis stressed that the real challenge for Orthodoxy today is to formulate a theology of otherness and identity and to take seriously into account the consequences arising from it, as well as the transcendence, based on the theological self-consciousness of the Orthodox Church, of traditionalism, fundamentalism, and religious nationalism.

In the aftermath of the event, on Thursday 12 May, the Director of the Volos Academy gave a videotaped interview to PhD candidates of the Institute of International Relations and the Yves Oltramare Chair on his theological and academic itinerary, his studies on the relationship between Orthodoxy and modernity, religious nationalism, political theology, the relationship between theology and social sciences / theology and human sciences, the dialectic of individual and community, individual and coenobitic monasticism, etc., which will be posted in time on the Institute's channel. On Friday May 13 a second interview followed on the Swiss State Radio on topics such as Orthodox theology and spirituality, the relationship between state and Church in the Orthodox world, the problem of nationalism and the Declaration against the teaching of the "Russian World", the divide of Orthodoxy and the West, ecumenical and interreligious dialogue, etc. During his stay in Geneva, the Director of the Volos Academy also met with the Metropolitan of Switzerland, Maximos (Ecumenical Patriarchate). The meeting was also attended by the protopresbyter of the Ecumenical Throne, Fr. George Tsetsis.

The public lecture of Wednesday, May 11, 2022 is already available on YouTube at https://www.youtube.com/watch?v=Q9xcfZugWPo.