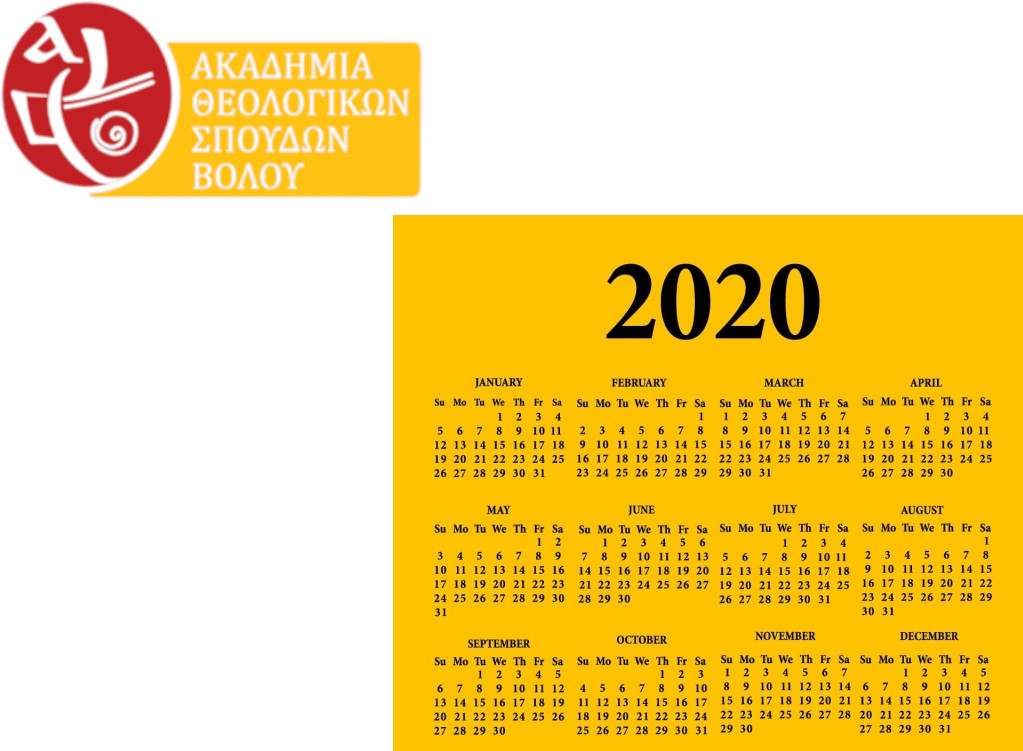 The Volos Academy for Theological Studies plans three interesting conferences for the first half of 2020, in collaboration with academic and theological institutions all around the world. Namely:

1. The International Conference “Politics, Society and Culture in Orthodox Theology in a Global Age” will take place in Thessalia Conference Centre (Melissiatika, Volos, Greece), February 6 to 9, 2020. The Conference is organized in collaboration with the Faculty of Evangelical Theology of the University of Münster (Germany) aiming, among others, to explore the deeper relation between Orthodoxy and Democracy. Languages will be English and Greek (simultaneous translation).

2. A conference devoted to the memory of the distinguished Greek theologian Amilkas Alivizatos (1887-1969) will take place on Saturday, March 14, 2020, in Thessalia Conference Center (as above). Its title is “Amilkas Alivizatos and Modern Greek Theology: Academic Teaching, Church Ministry and Ecumenical Dialog”. The meeting is organized in collaboration with the Fondazione per le Scienze Religiose–FSciRe (Bologna, Italy), and it forms a part of the series “Theological Portraits”.

3. The International Conference “Orthodox Constructions of the East” is planned to take place in Thessalina Conference Center (as above), May 14 to 17, 2020. Language will be English and Greek (simultaneous translation). This conference is organized in collaboration with the Orthodox Christian Studies Center of Fordham University (New York, USA); the Chair of Orthodox Theology of Münster University (Germany); Sankt Ignatios Orthodox Theological Academy (Stockholm, Sweden); the Institute for the Study of Culture and Christianity (Belgrade, Serbia); the Center for Philosophy and Theology (Trebinje, Bosnia-Herzegovina); the Romanian Institute for Inter-Orthodox, Inter-Confessional and Inter-Religious Studies (INTER, Cluj-Napoca, Romania); St Andrews Biblical Theological Institute (Moscow) and the European Forum of Orthodox Schools of Theology (EFOST, Brussels).

Detailed information on the above conferences will be announced soon, along with the information about additional events which are planned by Volos Academy and its specific Departments for the same period.

Volos Academy for Theological Studies, which in 2020 is turning 20, functions as an open forum of thought and dialogue, between the Orthodox Church and the broader scholarly community of intellectuals worldwide. In its effort to foster interdisciplinary and inter-religious understanding, the Academy has organized a number of events, such as international seminars, conferences, roundtables and publications. As a means for achieving its goals, the Academy for Theological Studies has collaborated with numerous institutions from Greece and abroad, jointly addressing problems and challenges of our time, respectfully taking similarities and differences into account. Since 2014, Volos Academy is a recognized Research Center by the Greek Ministry of Education, while since 2017 it is also a member of the European Academy of Religion (EuARe).