“Implementing the European Social Pillar: The Role of Churches and Religions” 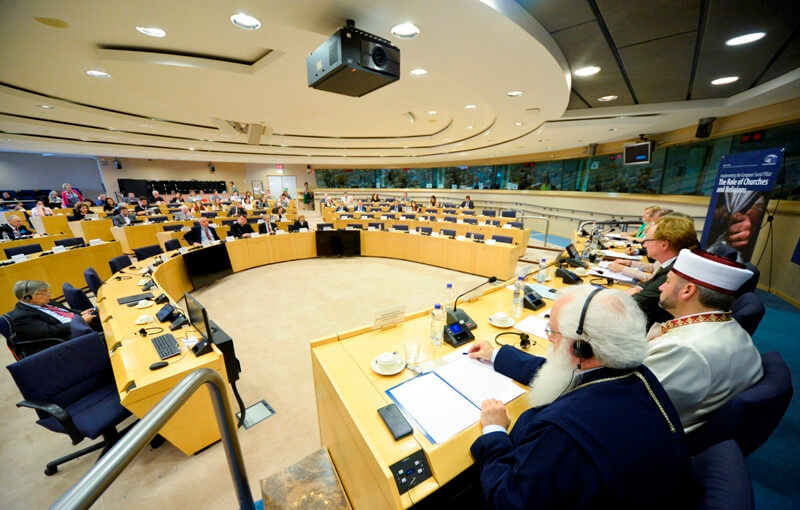 An International Seminar of European Parliament with the participation of

On Tuesday June 26, 2018, an international seminar on the theme “Implementing the European Social Pillar: The Role of Churches and Religions” hosted by the First Vice President Mrs. Mairead McGuinness, responsible by the European Parliament for the Article 17 of the Lisbon Treaty on the dialogue with churches, religious and non-confessional organisations was successfully held at the European Parliament. Mrs. Mairead McGuinness along with Mr. Luca Jahier (President of the European Social and Economic Committee) opened the meeting with some introductory thoughts. During the meeting two panels took place on the topics: “Human Dignity in work” chaired by Enrique Calvet Chambon, Member of the European Parliament and Member of the Commission on Labor and Social Affairs; and “Fostering an Inclusive and Caring European Society,” chaired by Georgi Pirinski, Member of the European Parliament and Member too of the Commission on Labor and Social Affairs, where representatives from European charity organizations and the major monotheistic religious traditions (Christianity [Orthodoxy, Catholicism, Methodism, etc], Judaism and Islam) participated, while enough time for discussion was made available to the audience.

H. E. Metropolitan Ignatius of Demetrias and Almyros, the only Orthodox Christian speaker at the seminar, joined the first panel. In his talk Metropolitan Ignatius stressed the theological significance of the human person, irrespective of gender and religion, as an “image” of God and the claim for decent working conditions arising from this approach, while he welcomed the importance of the European Pillar of Social Rights, moving in the right direction and asked for the later not to be just a theoretical vision. He also underlined the social work that the Orthodox Church of Greece is currently performing through its dioceses throughout Greece.

The meeting closed with the President of the European Parliament, Mr. Antonio Tajani, who welcomed the representatives of the Churches and Religions, while he insisted on the positive role played today by the religions in Europe for the social integration of all European citizens.

The European Pillar of Social Rights was jointly proclaimed and signed by the European Commission, the European Parliament and the European Council at the Gothenburg Social Summit in November 2017. The 20 principles and rights that make up the Social Pillar build on the existing social acquis, i.e. social mandate contained in binding provisions of EU law, and should serve as a “compass” for the renewal of current labour markets and welfare systems across the European Union (EU). Their implementation is largely the responsibility of the Member States in cooperation with the social partners and with the support of the European Union.

This press release draws from the chronicle issued by Rev. Dr. Georgios Lekkas, representative of the Director of the Office of the Representation of the Orthodox Church of Greece in the European Union, which has been published online here.