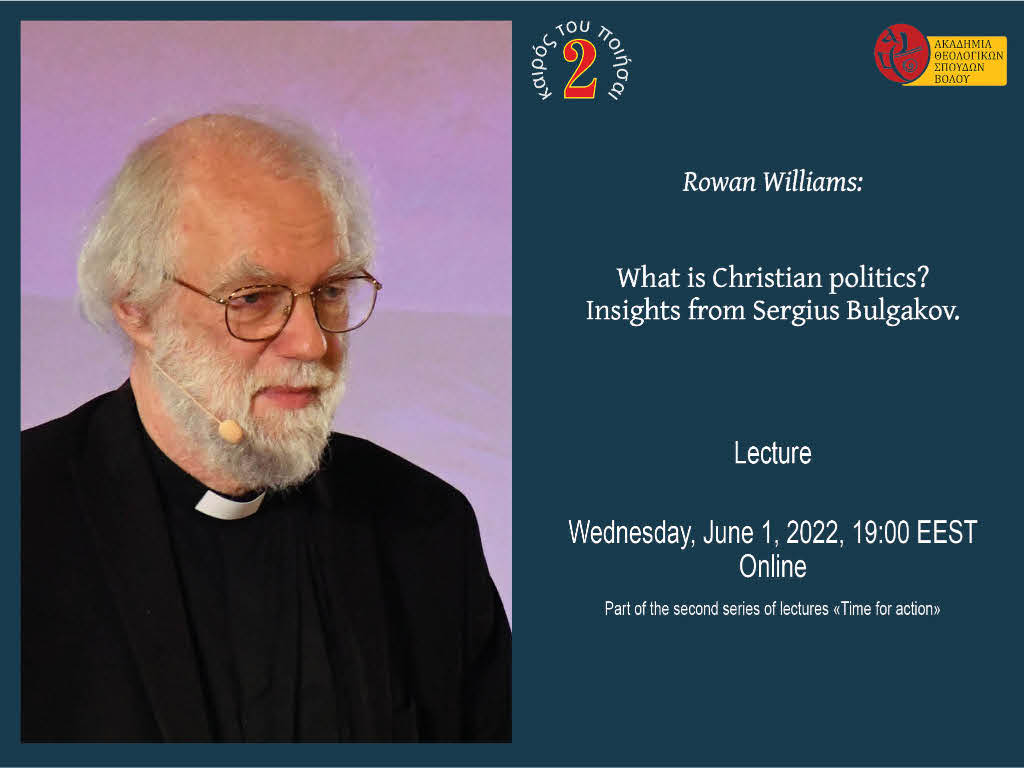 WHAT IS CHRISTIAN POLITICS?
INSIGHTS FROM SERGIUS BULGAKOV

The ninth lecture of this year’s series “Time for Action” by Volos Academy for Theological Studies will take place on Wednesday, June 1, 2022, 7 pm (Athens time). The speaker will be the former Archbishop of Canterbury, Rowan Williams, retired Master of Magdalene College, Cambridge, Κέιμπριτζ), and the topic will be “ What is Christian politics? Insights from Sergius Bulgakov”. The lecture will be delivered online, accessible through Zoom at https://us06web.zoom.us/j/88466878903, and it will be in English with interpretation into Greek.

Sergii Bulgakov briefly identified as a Christian Socialist but later wrote critically about the socialist worldview. This short discussion examines a couple of pieces he wrote in the early 1930's relating to the topic, and argues that his chief concern is with the risk of socialism not as a political programme but as a comprehensive anthropology -a 'pseudo-Church'- which he identifies as a problem in both left and right wing systems. The discussion also asks what light this may throw on some contemporary accounts of Church and society.

Rowan Williams has recently retired as Master of Magdalene College, Cambridge. Prior to that, he taught theology in Oxford, Cambridge, Bristol and Yale, and has written widely in theology, spirituality and contemporary issues. He had been Archbishop of Canterbury (2002-2012), where he worked hard to avoid fragmentation over disagreements on contemporary issues, such as same-sex marriages and the ordination of women. His original research focus was on Russian religious thought. His most recent works include:Justice and Love: A Philosophical Dialogue (with Mary Zournazi), and Looking East in Winter.